The main difference between peaches and nectarines, is that nectarines have smooth skins.

The origin of the nectarine is unknown, but it is thought to have developed more than 4 000 years ago in China, roundabout when the domestication of peaches started. Most of the cultivars grown today are also derived from ecotypes native to Southern China.

Nectarines and peaches are the same species but commercially regarded as a different fruit. The main difference is that nectarines have a recessive gene which causes them to have smooth skin, whereas peach has a fuzzy skin. Besides this, nectarines are generally sweeter and slightly smaller than peaches.

The name ‘nectarine’ was first coined in England around 1616, probably as a derivative of the word ‘nectar’ referring to the sweetness of the fruit. China is the world’s leading nectarine producer. 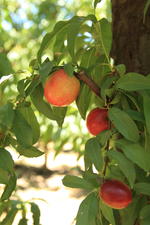 Nectarines, along with peaches, are some of the first fruit to be grown in South Africa after the arrival of Jan van Riebeeck in 1655. By 1892, nectarines and peaches accounted for the most planted trees in the Cape Colony.

Nectarines are produced throughout South Africa, but the bulk of production comes from the Western Cape. According to the Hortgro Tree Census of 2018, Ceres accounts for almost half the production with large volumes also coming from Wolseley, Tulbagh, the Klein Karoo, Paarl, and the Northern Province.

©Louise Brodie
A wide variety of nectarines are planted.

A variety of nectarine cultivars are planted, with the decision of which variety to plant being primarily motivated by environmental factors and market demand. Farmers replace old cultivars when new and improved ones become available.

Nectarine varieties differ in terms of their chilling requirements, time of ripening, physical appearance and susceptibility to various diseases. The skins are usually white or yellow.

Necatrines being sorted during production season.

Nectarines being sorted in a pack house in the Langkloof.

South Africa, though a minor international supplier, has generated a good reputation for the excellent quality of its exported fruit. The number of cartons exported has increased over the past few years, with more than half of the exported volumes going to the United Kingdom. The European Union and the Middle East also take large volumes, while smaller volumes are directed to the Indian Ocean Islands, Russia, the Far East, Asia and the rest of Africa.

Nectarines are high in fibre, vitamins and minerals and contain beneficial plant compounds, such as antioxidants that protect the body against ageing. The fruit and skin are edible, but the stone is discarded. Nectarines are primarily eaten raw and also go well in salads

When buying nectarines, select the smooth, firm, and brightly-hued fruit. Nectarines can be ripened by leaving them in a bowl with other fruit, such as apples or bananas. Alternatively, extend their shelf life by placing them in a refrigerator to slow down the ripening process.

The stone can be removed by cutting the nectarine along the seam, twisting the halves in opposite directions, and then pulling the halves apart.

For bulk or Nectarine export enquiries please use the enquiry link below.