What is Transpiration?
Climate and Farming in South Africa 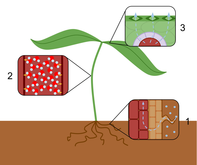 © Laurel Jules
Water molecules enter the roots passively (1) then forces of adhesion and cohesion forms a column of water from the roots to the top (2). Water evaporates through the stomata (3).
Transpiration is when a plant loses water in the form of water vapour. In the process, water from the plant tissues is lost to the atmosphere. This creates a reverse pressure and encourages the uptake of water from the soil via the plant roots.

Why is Transpiration Important?

Transpiration is the driving force of water movement inside a plant. As water evaporates from the leaves, water is drawn from the soil, transporting dissolved nutrients through the plant and into the plant cells for photosynthesis. Photosynthesis is the process during which plants use sun energy, water and gases such as carbon dioxide to produce its own source of energy, glucose.

How Does Transpiration Happen?

Water and nutrients are taken up by the roots and transported through the plant. In the intercellular spaces (the spaces between the plant cells) water changes from a liquid form to a gas to form water vapour. This water vapour escapes from the plant through stomata (small openings on the plant leaf) - like the sweat pores on human skin.The size of the stomata controls the moisture loss of the plant. Only a tiny fraction of the water taken up by the roots is used inside the plant. The rest is lost through transpiration.

Transpiration depends on the temperature, wind and the difference of water vapour pressure inside and outside the plant. The following factors also affect the transpiration rate:

Climate
Climatological factors such as air temperature, air humidity and wind. For example in dry windy conditions, transpiration will be faster than during cool moist days.

Crop
Transpiration rate is also influenced by the type of crop the development stage of the crop. Xerophytic plants (drought tolerant) reduce transpiration rates, by only opening stomata during the night. Often, these plants have hair on their leaves to reduce the effect of sunlight and wind. Some crops can even close stomata under extreme water stress conditions.

Crop diseases
Root rot diseases reduce the ability of roots to absorb water and therefore reduce the rate of transpiration.

Protection
Plants under net covers transpire less. This is because of better protection against wind and direct sunlight as well as the higher humidity under the nets.In the Napa Valley in California, electric heaters with big fans blow hot air over vineyards to limit frost.

How to Measure Transpiration?

The transpiration rate of plants can be measured using various methods: The traditional method is to measure differences in soil water content at the plant roots by instruments such as tensiometers, resistance blocks and neutron probes.

Transpiration rate can also be measured by keeping track of weight changes in lysimeters with the soil surface covered in mulch to eliminate soil evaporation. More advanced ways of measuring transpiration rate include probes placed permanently in the ground with links via radio or cell phone, to computers as well as infra-red measurement and satellite imagery.

To measure transpiration in tree crops is to measure sap flow in the trunk by noting differences in trunk diameter or by placing micro-measuring devices in or on the tree trunk.