©David Fleminger
Galvanised into action by the flurry of diamond mining, the South African government finally got around to settling the Richtersveld land issue. Thus, between 1925 and 1926, a commission was set up to formulate recommendations, and they decided that Melvill’s proposed allocation was still too large.
Another 143 000 morgen (122 500 hectares) was lopped off and the final size of the Richtersvelders’ land amounted to a little more than 300 000 morgen, less than half their original claim.
On the up side, this truncated piece of land was approved for the use of ‘Hottentots and Bastards’, under the authority of the Minister of Native Affairs. Eventually, in 1930, a formal ticket of occupation (or reservation) was issued by the Minister of Lands – although the land was still technically held in trust by the state.
The same process played out several other former mission stations around the country. The resulting entities came to be known as ‘coloured reserves’ or ‘coloured rural areas’. In Namaqualand, five of these were established: Richtersveld, Steinkopf, Leliefontein, Komaggas and Concordia. They were among the largest in the country, totalling over 1.5 million hectares.

The old management boards and councils were maintained as the political authorities in these coloured reserves. They decided who qualified for ‘citizenship’ in the reserves and therefore who was entitled to housing, grazing land, voting rights for the council etc.
Special concessions were also granted to bywoners (literally sub-farmers or squatters – who worked as herdsmen, sharecroppers or servants) and vreemdelinge (outsiders or strangers – who included missionaries, traders, teachers and even some white farmers).

These two groups had to get permission from the council for temporary housing and/or grazing land in exchange for a gift, tribute or service to the community.
By now, the various racial groups who lived in Namaqualand had intermingled and assimilated to a considerable extent. Although this meant that there was a peaceful co-existence between these former rivals, the concept of a distinct Nama or Khoikhoi identity was severely undermined.
This sense of ‘nationhood’ was further squelched by the apartheid-era population registration mania which sommer classified the whole bleddy bunch of them as ‘coloured’. 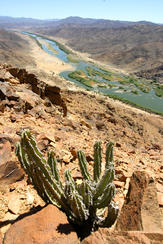 ©Jaques Marais
Accordingly, the basters came to assume a more prominent role in the political life of Namaqualand’s coloured reserves.
They were, by and large, slightly better off and numerically superior to the remnant Khoikhoi population, and they also had the benefits of a more sustained education at the hands of the missionaries.
In the Richtersveld, this presence was significantly bolstered by the arrival of the Bosluis Basters in 1949.
This new group of ‘bastaards’ had been forced to move from their home in the Pofadder district of Bushmanland by the Group Areas Act, which was officially passed in 1950.
It was an insidious piece of legislation which stipulated that all racial groups had to be geographically segregated from one another.
This act (an extension of the old Land Act of 1913) was the cause of a string of forced removals that traumatised the country during the 1950s (including Sophiatown, District 6, South End etc.).

And so, when the apartheid government of D.F. Malan cracked the whip, the Bosluis Basters (comprising about 68 families) had no choice but to pack their belongings into ox wagons and trek more than 300 kms through the thirstlands in search of a new home.
Their destination was the remote stretches of the Richtersveld, which was considered to be a dumping ground for unwanted and/or disreputable people.
It must have been an arduous journey, but they were assisted by the benevolent leadership of their pastor, the Reverend Eksteen, who had been with the community since 1945. Finally, a site was selected on the banks of a small spring, in the middle of nowhere. A church was soon built and the new settlement was named Eksteenfontein, in honour of their spiritual leader.
In closing, allow me to point out that the Group Areas Act did cut both ways. In the 1950s, about nine families of white farmers (who were now technically squatting on a coloured reserve) were removed from the Richtersveld.
These included: the Avenant family who farmed at De Hoop in the present-day Richtersveld National Park (the graves of several Avenant children can still be seen if you know where to look); the Van Rensburgs who had a homestead at Grasdrif; the Graaff family at Gelykwerf; the de Vries brothers who farmed on the summit of the Vandersterrberg and at Koeskop; and the Bosman family who resided at Stinkfontein (now Eksteenfontein).By David Fleminger
Previous - Land Management
©2021 South Africa Online (Pty) Ltd. SouthAfrica.co.za. All Rights Reserved.