Flower Power of the Richtersveld

A Carpet of Colour

©David Fleminger
Much has been written about the annual wildflower spectacular that turns the dry plains of Namaqualand into a ‘carpet’ of colour every spring. In fact, it tends to send most writers into paroxysms of poetic platitudes that border on the hysterical. I, however, am made of sterner stuff and will do my best to remain calm.
Nevertheless, flower season in Namaqualand is hugely and profoundly impressive. In other words, it’s blooming marvellous. But what causes this natural phenomenon and why is it over so quickly? 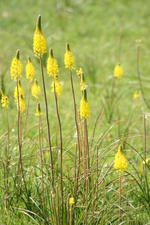 ©David Fleminger
Well, basically, every plant species in Namaqualand has developed a strategy to cope with the low rainfall.
Succulents store water in their leaves or stems, geophytes (or bulbs) store water in underground organs.
Others (such as trees and shrubs) grow deep roots or confine themselves to water courses. But the annuals (which include the daisy family) have a different method.
After the winter rains, these cunning plants grow quickly; germinating, flowering, dropping their seeds and then dying all in a matter of weeks.
The seeds then wait in the soil for the next good rainfall, whereupon the whole cycle begins again.
Some seeds can survive for years underground, until there is enough rain to coax them into life once more.
So, if the winter rains have been good, a few weeks later the stage is set for a collective eruption of yellow, white, orange and purple blooms that will pop the eyes and delight the soul. And the sheer volume of flowers on display is jaw dropping. 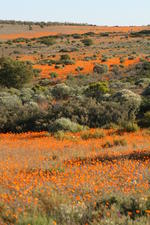 ©David Fleminger
However, Hendrik van Zijl, one of the botanical gurus who live in the Nieuwoudtville area, says that it’s not just about the numbers.
He believes that it is the diversity of different species which makes the flower displays so amazing.
All in all, there are about 3000 species of flowering plants in Namaqualand, some of which are very rare or narrowly endemic.
Therefore, if you really want to be a good flower spotter, do your homework and get the necessary wild flower guide before you start driving around. After all, it pays to know your Iridaceae from your Asteraceae.

Blowing in the Breeze

©David Fleminger
With all this simultaneous germination, the millions of flowers blowing in the breeze are desperate to get pollinated by the limited supply of suitable insects.
This leads to fierce competition and every plant species has developed its own ingenious ways to attract the right kind of pollinators.
Many rely on showy displays of big, bright petals in seductive hues of yellow, white, red and orange.
The petals of many vygie flowers are positively iridescent, luring bugs in with their shimmering purple power.
Additionally, the petals of some plants have developed markings that look like specific insects, which attract either mates or feeders to the pollen.
Monkey beetles, for example, like to use the flower heads of daisies as a mating platform.
The subsequent roll in the pollen covers the insects with, what is in effect, the plant’s sperm, which they then carry with them as they visit other flowers.
So, to encourage the attention of young beetle lovers, several species of Gazania have developed markings that mimic female monkey beetles.
Similarly, the Bee Fly is attracted to the shiny dots around the flower head of the mis-named Beetle Daisy, which reflect light as if from the body of a fellow Bee Fly.

©David Fleminger
Other plant species have evolved in harmony with their pollinators, developing flower structures that are uniquely suited to the anatomy of their symbiotic partners.
For example, some species of Pelargoniums and Irises have developed flowers with slender tubes that only fit the mouthparts of one of two suitable species of tangle-winged flies. Talk about hard to get.
Now, with all this talk of frenzied procreation, don’t go getting the idea that the entire Namaqualand region is blanketed with wall-to-wall daisies. Instead, the flowers tend to occur in clumps and patches.
So, throughout the region, you will often see isolated stands of colourful flowers growing in an otherwise brown landscape.
Even in the floral heartlands, one field may be covered with colour, while another may not appear to contain even a single petal.