The Beginning of a Illustrious Career

Dr Peter Magubane is an international icon best known for his journalistic and photographic work under the repressive regime of apartheid in South Africa. He was born on 18 January 1932 in Vrededorp and raised in Sophiatown. I

nspired by photography after his fruit vendor father bought him a Kodak Brownie camera when he was a schoolboy, his photographic career began during pivotal years in South Africa’s struggle for democracy. He put his camera to good use as an opposing voice to the apartheid government’s tyranny by capturing everyday experiences and struggles of black South Africans. These images exposed the injustices and humanitarian crisis happening in the country to the world’s media. 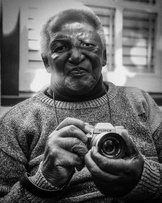 Dr Peter Magubane's photographic brilliance developed following a lucky break in 1955 after he joined Drum magazine as a driver and messenger. He soon landed a job as a darkroom assistant to Jurgen Schadeberg. His first major assignment was covering the African National Congress’ 1955 convention.

Dr Magubane captured various experiences throughout the apartheid years. He documented the protests against the Pass Laws, the rise of Umkhonto we Sizwe, Nelson Mandela’s arrest, the Rivonia Trial, the banning of the ANC, the Sharpeville riots, the rise of Steve Biko’s Black Consciousness Movement, and the Soweto student uprisings, where he informed rioting students that “A struggle without documentation is no struggle at all.”

Following the Soweto uprisings his house was destroyed in a fire and he was detained with fellow black journalists for 123 days - one of the many ways in which he paid a price during the course of his work. His defiance against the apartheid regime of the day extended to the erection of his own darkroom at the Rand Daily Mail in an era when the laws of the nation forbade him to share the same darkroom as his white colleagues.

Hired in 1967, he was the first black photographer at this publication. He remained in their employ until 1980, notwithstanding a five year banning order from taking any images, which lapsed in 1975. This included 98 days in solitary confinement and six months imprisonment.

Magubane's Fight Against the System

During the apartheid years, Dr Peter Magubane endured harassment, beatings, buckshot wounds, long periods of arrest and interrogation. He was shot seventeen times at a student’s funeral in Natalspruit, yet this had nothing on his 586 days in solitary confinement in 1969.

Dr Magubane’s defiance extended to his skill for creatively hiding his camera from police in a hollowed out Bible then firing with a cable release from his pocket. On other occasions he took covert shots with his camera, which was hidden beneath his jacket, inside a milk carton or half a loaf of bread, which he pretended to eat while taking images.

Dr Peter Magubane had several photographic stints abroad that included London during the early 1960s. Between 1978 and 1980 he was in the employ of Time magazine as a correspondent. 1980 also saw Dr Magubane temporarily depart South Africa for New York.

Other major publications that have commissioned him with heavyweight assignments include National Geographic, Life, New York Times, Washington Post, Paris Match and Sports Illustrated. The United Nations has been a client, through the United Nations High Commission for Refugees and UNICEP.

His association with Nelson and Winnie Mandela dates from the 1950s, both as friends and in his professional capacity as a photographer. Dr Peter Magubane became Madiba’s official photographer from the time of his release until his early years in the Presidency.

Dr Magubane considers his greatest honour being bestowed with the South African Order of Meritorious Service Silver Class II from President Nelson Mandela. He has been known on numerous occasions to place his camera aside to intervene so as to prevent people from being killed.

For this he was awarded the American National Professional Photographers Association Humanistic Award. He was the first black South African to win Press Photo of the Year in 1958. After South Africa saw its first few years of democracy, Dr Magubane turned his attentions to images of the complex tribal and territorial conflicts following the new state of the nation. He subsequently focused his lens on the cultural traditions of post-democratic South Africa.

Dr Peter Magubane holds nine honorary doctorates and has been awarded a Cornel Cappa Lifetime Achievement Award from the International Center of Photography in New York.

He has also received the Robert Capa Award, the Special Missouri Honour Medal for Distinguished Service in Journalism, the Martin Luther King Luthuli Award, a Lifetime Achievement Award from the Mother Jones Foundation and Leica Cameras, and a Fellowship by the Tom Hopkinson School of Journalism and Cultural Studies at the University of Wales. Early awards on home soil included an excellence in journalism award presented by Walter Cronkite and sponsored by Stellenbosch Farmers’ Winery.

Dr Magubane has twice exhibited 100 of what he considers his most iconic images of Nelson Mandela. The first exhibition was held at a United Nations gathering in Poland, where the exhibition was opened by former Polish President Lech Walesa.

A Tribute to Dr. Peter Magubane by David Meyer-Gollan

Dr Peter Magubane is one of South Africa’s most internationally acclaimed photographers....more

At Home with Dr Peter Magubane

Dr Peter Magubane's lounge is filled with bright-beaded pots and wooden carvings. In the corner an antique gramophone sits proudly near a black and white photograph...more

An otherwise normal day in June 1969 is life-changing for the newsman Dr Peter Magubane. The brutal fist of censorship strikes down hard. It's not the first time he's been harassed by the police...more

The day is 16 June 1976. In the lead-up to this day, a phenomenon has swept the land. Word has spread like invisible fire. The black youth guard a secret closely. Not even...more

Dr Peter Magubane arrives in Soweto through zigzagging back roads. Peter is scouting the scrap heaps and coal yards for underage child workers. His presence owns the space...more

Dr Peter Magubane remembers his innocuous first meeting with the man who would later be counted as a lifelong friend. 'It was during the days when Mandela was practising...more

Peter Magubane, who has made an outstanding contribution to photojournalism over the past four decades, has utilised his talents as a photographer to capture this national...more

Peter Magubane by Desmond Tutu in 1986

Peter Magubane is a consummate artist with the lens and he has quite rightly gained an outstanding international reputation. In Peter's stills it has been used to bring...more

Peter Magubane, one of South Africa's most celebrated cameramen took it all in his stride. He has captured and documented some of the most significant historical moments...more