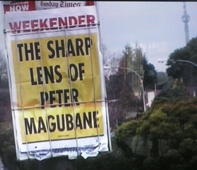 He was beaten up and had his nose broken by apartheid police. He was shot at, struck by buckshot, repeatedly arrested, detained for 586 days — the longest known period of solitary confinement — and banned for five years from doing his work.

Peter Magubane, one of South Africa's most celebrated cameramen took it all in his stride. He has captured and documented some of the most significant historical moments and events in South Africa from the women's march to Pretoria, to the Rivonia Trial, the Sharpeville massacre, the uprising of June 16 1976 and, later, the release of Nelson Mandela.

He had the honour of being appointed President Nelson Mandela's personal photographer and captured the life of Madiba after his release. Magubane has made it his life's commitment to use his camera to capture history and to expose injustice. "The camera was my gun. I was able to kill apartheid with my 'gun'," Magubane declared. "I wanted to free this country without using a real gun."

Magubane's career started at Drum, where Jurgen Schadeberg, then Chief Photographer, took him under his wing. His first break was covering the 1955 ANC convention. Since then, he has documented decades of historic events, working undercover to get some photographs surreptitiously by sometimes hiding his camera in a hollowed out bible, or in a loaf of bread.

"If I want to take a picture and you don't want me to, I will find a way. After 586 days in solitary confinement what more could you be afraid of?". In 1967, he joined the Rand Daily Mail, and his brushes with the law began: he was arrested while covering a demonstration outside Winnie Mandela's house, kept in solitary confinement, but the charges were dropped.

He was then served with a five year banning order which prohibited him from working as a photographer or entering newspaper premises. This was followed by a 98 day spell of detention, six months' jail, then another spell of detention. After spending 586 days in detention in Modderbee and Pretoria, he was released — just in time to cover the June 16 uprising.

Honoured in SA and Internationally

He has been assigned projects by international publications Time Magazine and Sports Illustrated. Magubane has been honoured both in South Africa and internationally, being awarded nine honorary doctorates. He has published more than 23 books and staged dozens of photographic exhibitions.
©2022 South Africa Online (Pty) Ltd. SouthAfrica.co.za. All Rights Reserved.