© Marinda Louw
A goat with an abscess that was drained and disinfected.

Good feeding and preventative healthcare such as vaccinations and parasite control form the basis of assuring healthy goats, but even so, animals are always at risk of diseases, parasites, metabolic conditions and toxins. Still, farmers can do a lot to prevent or reduce diseases in their goat herds.
When deaths do occur, it is important that a veterinarian do a post mortem to find the cause of death. This can prevent diseases spreading and help to improve the healthcare management on the farm.

©Marinda Louw
A creep feeder is used for kids to prevent older goats accessing their feed.
Good nutrition is important to build strong immune systems in goats. Sometimes extra feed is needed when grazing conditions are of a low standard or not enough. This can have a huge positive impact on the condition of your goats, especially when grazing is poor.
The critical periods for extra feeding are:
Flush feeding: 2 weeks before mating and the first 3 weeks during breeding season (mating). Two-tooth ewes (12 - 18 months of age) should be given priority. In cases where feeding is expensive, feed well for a shorter period, do not less feed for a longer time.
Pregnancy: Give extra feed from day 90 of pregnancy. This is important even in reasonably good grazing conditions. These ewes need two to three times more energy (to feed the growing fetus) than ‘dry’ ewes.
Lactation: Extra feed is needed in the first six weeks of lactation.
Weaned kids (baby goats): Offer ‘creep feed’ prior to weaning so kids becomes adapted to feed. The stress of weaning has a big impact on growth rate of kids.
Giving supplementary nutritional feed to ewes and kids in these important phases reduces the risk of abortion, stillbirth and weak kids. The kidding percentage (number of kids born per doe per year), health, growth rate as well as mohair production of Angora goats can be optimised with giving extra feed.
Goats are field grazers and field plants (also called browse plants) usually have higher mineral concentrations than pastures. Goats are therefore generally less likely to have mineral deficiencies than sheep, but vitamins and minerals should be available 4 - 6 weeks before kidding and in times of drought.

©Marinda Louw
Some farmers use Triple Sulfa to treat diarrea in their goats. Ask your vet first.
Wireworm and brown stomach worm (both types of roundworms) are the biggest disease threats to goats. Coccidiosis is another common internal parasite often affecting kids from 4 weeks to 5 months and develops when the ‘eggs’ of the coccidia parasite enters the digestive system. It is found on pastures, water and often on the teats of lactating ewes. Symptoms include diarrhoea, bloody urine and weakness.
Stress (such as weaning or moving) makes the kids more sensitive to coccidiosis and roundworm infestation. The amount of worms in a goat is related to the density of larvae on pasture and the weakness of a goat’s immune system.
A major challenge for goat farmers is to provide a safe environment for their goats while minimizing parasite resistance against medicines. This is done by dosing only those animals that need to be dosed. This is called ‘targeted selective treatment’ and is done to maintain ‘refugia’. Refugia is the maintenance of a drug-sensitive population of worms and is an important management concept.
A wide variety of ticks are found in areas where goats are kept. Ticks are blood suckers but also transmit diseases such as heartwater, cause infections (abscesses), tick bite wounds, skin damage and toxicosis such as tick paralysis.
Red and blue lice are other important parasites that need to be controlled. These lice cause severe irritation of the skin and will cause the goat to scratch itself, rub against objects and loose of body condition. In Angora goats, this leads to weakening, matting and discolouration of the fleece.

When goats are raised in field conditions, vaccinations against pulpy kidney (Clostridium perfringens D) and Pasteurella (caused by Pasteurella haemolytica and Manhaemia haemolytica) are recommended. Under more intensive conditions where goats are kept on pastures or fed, then multi-clostridial vaccines combined with Pasteurella are advised. Ask your vet.
When goats are vaccinated for the first time, a second vaccination must be given as indicated, read the medicine’s instruction carefully. The second vaccination is usually 4 weeks after the first. Not vaccinating the second time can result in inadequate immunity and may render the first dose of vaccine and future annual vaccinations ineffective.

Metabolic diseases are less common in goats than sheep but acidosis does occur. Acidosis is caused by overfeeding of carbohydrate (such as grains) and not enough good quality fibre (roughage). This may occur during times of drought, flush feeding, pregnancy and lactation. A reduced intake of fibre and periods of hunger can also lead to suboptimal pH conditions in the goat’s rumen. 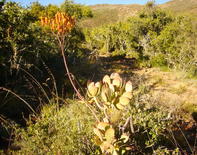 ©Dr Mackie Hobson
Cotledon orbiculata also known as pig’s ears, plakkie and kouterie can cause cardiac glycoside poisoning or 'krimpsiekte' when grazed by goats.
The majority of the cardiac glycoside (a poisonous compound often found in plants) poisonings are due to ‘krimpsiekte’. Angora goats are more prone to poisoning than Boer goats. ‘Krimpsiekte’ is caused the succulent Cotyledon plants, commonly referred to as plakkies or nenta. Poisoning in small stock often occurs in areas of the little Karoo and southern parts of the Great Karoo. Symptoms mostly involve the nervous system, but animals may also show signs of acute abdominal pain.
Please note: Information is for educational and informational purposes only and may not be construed as medical advice. The information is not intended to replace medical advice or treatment offered by your veterinarian.