The timing of initiation, which was, and is, always in midwinter, was dependent on the presence of a high-ranking son or grandson of a chief among the initiates. He was leader of the initiation lodge and lifelong leader of that regiment or age-set 'mphato'; in this way the men were linked to the chieftainship.

©Dr Peter Magubane
An elder in the Pedi tribe blows a horn as part of the initiation ritual.

A few days before the bodika, a master 'rabadia' and a deputy-master 'moditiana' were nominated by the chief's inner council to control and direct the ceremony. They carried out their functions as the envoy of the chief. A medicine man 'thipana' was also elected to perform the circumcision of each initiate. He was to be from outside the group, to reduce the threat of witchcraft. During the night of the opening ceremony, the badikana, initiates of the first session, lined up in single file, with the leader in front.

Behind him, in descending order of rank, were the others from the royal kgoro, followed by the boys from the next kgoro, down to the boy from the most inferior kgoro. The boys bent over and were given, in descending order, two severe lashings on their naked backs by the rabadia. The lashing by rank consolidated forever the tradition that status was conferred by birth alone, and not by personal prowess. This process underscored the function of initiation in Pedi society, both to educate, and also to position candidates within the structure of the group.

©Dr Peter Magubane
Circumcised boys prepare for the final stage of bodika by applying letsoku, a mixture of red clay and animal fat.

Before dawn the next day, the war-horn 'phalafala' was blown and, on the order of the rabadia, the badikana went to a river, where they were circumcised by rank. After the operation the boys sat in the cold water of the river, which helped to numb the pain. After resting for the day the boys were marched to the mphato 'initiation lodge', again in rank.

The lodge was constructed out of wooden poles and laths lashed together in a lattice work, which was then covered with grass and branches. It had two entrances, one in the east, for the exclusive use of the men officiating at the initiation school, and the other in the west for the boys. The men and boys also slept separately.

Each kgoro had its own fireplace, around which the initiates of that family gathered and slept. The fires built had great symbolic significance, as they were lit by an ember taken from the chief's fire and, for the duration of the bodika initiation process, they were not allowed to die. Daily routine during the whole bodika session varied very little. Most of the day was taken up by hunting and practising the crafts of men, such as leather and woodwork.

The early mornings and late afternoons were devoted to formal instruction and the singing of initiation songs. The badikana were taught the masculine qualities of courage and endurance, obedience to their fathers, with a great deal of stress on demonstrating deference towards and respect for the chief. Traditional lore and formulae - which included history, rituals and rules - were taught using archaic language which had to be learnt by rote.

Throughout, the boys were subject to tests of endurance, including daily lashings. Discipline was rigidly enforced, and death during initiation was not unknown. The members of the bodika consisted of an age-set which, shortly before the end of the bodika, received a name. This group used to have a military function and was under the command of the kgosana ya mphato.

The members measured their age by referring to this regimental name, distinguishing themselves in age from the members of other initiated regiments. Once the naming process was finalized, the group was notified of the date the bodika would end, and food was prepared for a great feast to celebrate the homecoming of the initiates.

On the final morning, the initiates washed off the white colouring with which they were decorated throughout the process. Each father cut his son's hair and gave him a new loincloth in recognition of his newly acquired manhood.

The boys' bodies were then smeared with a mixture of fat and red ochre. At this stage they were known as dialoga 'survivors'. They were lined up in rank order and ceremonially lashed for the last time. After this, they marched off without looking back while the rabadia set fire to their mphato. 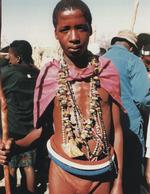 Some two years later the bogwera initiation session was convened. In form, this was almost identical to the bodika, except it was less formal and lasted for only about a month. During this session, the initiates were incorporated into male society, which enabled them to fulfil the responsibilities of men.

The bogwera would also cement the bonds of brotherhood created through membership of regiments. Lifelong ties of solidarity and cooperation were created during the bogwera. Since the onset of labour migration, these ties have formed the basis of groups of 'home-boys' - banna ba gagesu — who have helped each other find accommodation and work in town, repatriated the bodies of deceased members, and kept each other informed about matters of importance which occurred in the countryside while they were working in town.

The stages of male growth and development in traditional society were clearly defined and required the fulfilment of set rites of passage. These stages can be summarized as: baby 'lesea'; boy 'mosemane'; youth 'leSoboro'; circumcised youth 'modikana'; member of a short transitional period 'sealoga'; initiate 'leagola'; initiate undergoing the bogwera 'legwere'; and finally adult man 'monna'.