©Nigel Dennis
Chacma Baboon (Papio ursinus) feeding on mopane leaves in the Kruger National Park.
Chacma Baboons (Papio Ursunis) are seldom responsible for livestock losses, but troops may cause extensive damages to vineyards, vegetable and fruit orchards. They occur in various regions throughout South Africa, except for the Namaqualand Sandveld where there is little place for them to hide at night.
They have adapted well to human-modified environments, with humans feeding baboons enforcing the association of humans with food and also communicating the notion that baboons rank higher than humans, since dominant baboons often take food from less dominant ones.
Baboons have dog-like snouts and are grey to nearly black or grey brown, with black nape fringes and black fur on their hands and feet. According to the Predation Management Manual, males measure 120 cm to 160 cm long, weigh 25 kg to 45 kg and have razor sharp teeth. Their tails can be up to 86 cm long. Females are 100 cm to 120 cm long and weigh 12 kg to 20 kg. Their tails measure between 50 cm to 60 cm.
Baboons are sexually mature when they are around five years old and mate throughout the year. The gestation period is six months long and infants are weaned after six months but will remain dependent on their mothers for protection until they are about two years old. Fathers are highly protective of their offspring and occasionally babysit the young, while the mother forages.
Mature males usually leave their natal troop and attempt to join another troop when they are about seven years old, which helps to keep inbreeding low. Males are extremely vulnerable and often seen as rogues during the time they are looking for a new troop. When a leader – called the alpha male – is overthrown, the new leader may kill all the previous leader’s offspring. Without an infant to suckle, the females quickly become ready for reproduction again. Baboons can grow up to 40 years old. 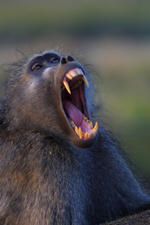 ©Roger de la Harpe
Chacma Baboon yawning in the Kruger National Park.
Troops may be comprised of as few as seven to a hundred baboons and more, with home ranges varying between 1,5 km² to 40 km², according to The Endangered Wildlife Trust. Larger troops tend to have larger home ranges and range at lower densities, while troops with access to high-quality food and resources tend to have smaller home ranges and range at higher densities.
Baboons primarily operate during the day and retreat to trees or cliff roosts before sunset.
Whilst baboons are omnivores, their diets are primarily plant-based. Hunting is almost exclusively a male activity, according to the Predation Management Manual. There is no specific killing pattern, but prey usually die of multiple wounds. Larger sheep are often thrown over and bitten on the chest, while lambs may be ripped open.
Their feeding behaviour is messy, with prey animals being skinned towards the neck and head area. They usually start eating at the milk stomach, intestines are removed and the skin is torn to provide access to the rump. Ribs, kidneys, liver, lungs and the heart are also eaten. 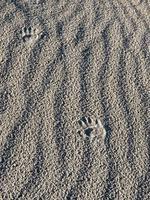 ©Peter Delaney
Baboon prints in sand.
Baboons are highly intelligent animals, hence they quickly learn to overcome and dodge barriers. Electric fencing, noise, kraaling of animals, the use of shepherds and guard animals may help to prevent losses, but new research has found reflective prisms to have no effect on baboons, especially when used in urban areas where the baboons have become used to light reflecting from windows.
The relevant authorities should be contacted for permits to trap or shoot baboons. They are a protected species in the Western Cape, so farmers in this province may only shoot two baboons a day on their own land unless they have a permit to shoot more.
The shooting of baboons may actually “backfire”, by resulting in juvenile “troublemakers” taking over. The killing of an alpha male causes chaos within a troop and can result in smaller, less manageable splinter troops forming raiding parties.By Glenneis Kriel
©2021 South Africa Online (Pty) Ltd. SouthAfrica.co.za. All Rights Reserved.