© David Blaine
Goat meat is low in fat and has fewer calories than chicken.
Goat farming in South Africa is focused on the production of goats for meat (indigenous and Boer goats), fibre (mohair from Angora goats), milk products from dairy goats as well as some skins and cashmere. Of these, by far the biggest industry is the informal sector of meat goat farming. In this sector, goats are sold live and slaughtered at informal abattoirs for religious and cultural purposes.
Goat meat makes up over 60% of all red meat eaten worldwide. Preferences for goat meat are determined by cultural and religious backgrounds as well as the socioeconomic status of the community, research by the Alabama Cooperative Extension System of the of Alabama A&M and Auburn Universities in the USA has found. Goat meat is enjoyed by Hispanic consumers who prefer young high-quality goat kids and Caribbean Islands and Muslim populations who prefer meat from older goats as well as intact (not castrated) males.
Cabrito is goat meat from milk-fed goats, usually slaughtered young - between 4 and 8 weeks of age. All parts of a cabrito are utilized, including the innards or organ meats. The meat is tender and tasty at this age. Cabrito is a delicacy in Central and South America.
Meat from mature goats is mostly used in processed foods such as sausages.

Goat meat (chevon) is popular because it is low in fat and doesn’t have the gamey taste of venison. Most people prefer meat from goats younger than 12 months as it is more tender. In addition, chevon is lower in cholesterol than rabbit, venison or beef. The saturated fat in goat meat is 40% less than that of skinless chicken and about 50 - 60% lower in fat than similarly prepared beef, but has a similar protein content.
Compared to chicken (162) beef (179) pork (180) lamb (175), goat meat has the least amount of calories - (122). 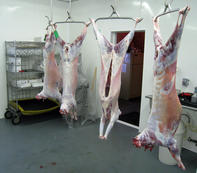 ©Susan Schoenian University of Maryland Extension
South African research have shown that goat meat toughness are influenced by pre-slaughter stress.
Due to certain characteristics of goat meat (high pH values and low glycolytic potential), it is necessary to use certain procedures to improve goat meat quality. For example, electrical stimulation and delayed chilling of carcasses can prevent cold shortening and improve the conversion of muscle to meat.
If a goat carcass is cooled down too fast after slaughtering, cold shortening occurs, resulting in the muscles contracting. This shortens the muscle fibres, making the meat tougher.
Consumer concerns about stringy and tough goat meat can be allayed by incorporating these practices as part of the normal slaughtering procedures at abattoirs.

©Susan Schoenian University of Maryland Extension
Goat meat from young animals (less than 2 years) can be cooked through dry fast heat.
American research has indicated that consumer education about the cooking of goat meat is needed to increase the popularity of goat meat. Due to its low-fat content, it is recommended to cook goat meat at low temperatures.
Cooking at high temperatures may cause toughening and may result in dry, tough meat. This is especially important when preparing meat from older goats, for example, Angora goats.
Cooking methods may yield different results depending on the age of the goat and also the type of goat. Elna van den Bergh who did extensive cooking trials with goat meat of both older Angora goats and young Boer goats found a difference in the meat; Angora meat, although from older animals, have a much finer meat grain compared to that of Boer goat meat.
For meat from older animals a long slow wet cooking yields much juicier results than fast dry cooking such as a braai (grilling).
This meat is also ideal to use as minced meat as the tougher fibres are broken down during the mincing process.
Modern life is busier than ever and there is not always time (and the skill) to marinate and slow roast meats for example.
Elna recommends that value-added goat meat products such as sosaties, sausage, dried sausage and marinated products may encourage consumers to increase the use of goat meat in South Africa.