A number of things indicate that, over the years, the K2 people entrenched themselves in the region and consolidated their grip on trade with the east coast. For example, hundreds of ivory objects have been found at K2, from complete tusks to arm-bands to bracelets to chips. Ivory working is usually associated with the male sphere of influence, and some of these artefacts were probably intended for local use.

Many of the items, however, were designed for international trade, as is evidenced by the ivory knife hilts which are thought to have been created for the Arabian market. Excavations at K2 have also brought up thousands of imported glass beads from Egypt and India. These valuable beads, found in a variety of colours ranging from blue to green, were probably given as payment for ivory by the Arab traders on the east coast.

The beads eventually became so plentiful that the K2 people started melting them down to create large, conglomerate beads, called ‘garden rollers’. This was done by heating the beads until they became molten and then pouring them into clay moulds. It is thought that they did this to make the beads more portable and thus more practical as a form of local currency. Some of these Garden Rollers have even turned up at unrelated sites over 300ks away. It is the earliest evidence of glass-working in Southern Africa. 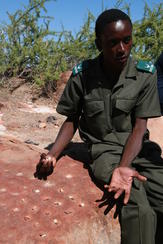 In addition to the beads, K2 yielded a number of copper beads and bracelets, along with the detritus of copper working (copper slag, broken crucibles and blowpipes). Traditionally, copper is associated with women, and the copper ornaments may have played a part in female ancestor worship. Iron, on the other hand, is associated with men, and several iron spear tips and other objects have been found at the site. Interestingly, the area around K2 has no deposits of either copper or iron (the nearest copper is found at Mussina, about 90 ks away, and the iron probably comes from farther afield.

This means that the people of K2 were busy trading with other tribes in the vicinity who had access to these materials. Clearly, the K2 people were developing their trading acumen and accumulating a vase stockpile of wealth and political prestige. There is even evidence that a segment of the earlier Zhizo people remained in the area (or returned to the area) and settled around Leokwe Hill, content to function as a vassal state to the more powerful K2 culture.

©Shem Compion
In addition to trade, favourable environmental conditions blessed the people of K2 with fertile fields and ever-increasing herds of cattle. This may have contributed to a shift from a communal mindset to a culture of private property. As certain people got rich, however, the social dynamics would have changed within the society until the rich became a political elite. Thus, it is said that the Kingdom Era (which would reach its height at Mapungubwe) began around 1000 AD with the K2 culture. 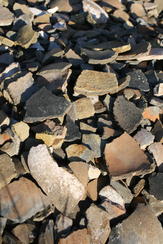 Strangely enough, much of this invaluable information about the life and times of K2 has been gleaned by looking through the trash, literally. Just like today, the people of K2 generated large amounts of garbage that had to be disposed of. This was generally done by throwing the detritus on a rubbish heap, called a midden. K2 contains a number of middens, ranging from a large communal tip to smaller household middens behind the kitchen of each hut.

The central midden at K2 (which was 4 metres thick) has been the focus of extensive excavations, and archaeologists have had a great time going through this pile of pre-historic junk. For example, extrapolations from the pottery remains found in this midden have shown that the people of K2 spoke an early form of Shona, specifically Kalanga or Western Shona. Today, the site at K2 consists of a large pit that was excavated in the 1930s and not much else.

The central midden, however, is still visible, and it has been complemented with several info boards describing the people of K2 and outlining the various layers identified by investigators. Unfortunately, K2 is currently off-limits to modern visitors. But there are plans to include it on the Heritage Tour once the site has been stabilised. K2 is located within the Mapungubwe National Park, less that one kilometre away from Mapungubwe Hill.