Differences Between Bushmen and Khoikhoi

©Shem Compion
Although the Khoikhoi and the Bushmen are related, both genetically and linguistically, there must have been a culture clash when the two groups first encountered each other.
The Khoikhoi, for their part, held their herds in very high esteem, considering them a sign of status and wealth. The animals were considered private property, so families with lots of animals were considered ‘rich’, while those with few animals often had to take up positions as servants for more powerful clans.
This was a significant move away from the more socialist structure of the Bushman groups, whom the Khoikhoi considered inferior.
Even the name ‘Khoikhoi’ (meaning ‘men of men’) served to distinguish them from the lowly Bushmen, whom they called ‘Sonqua’ or ‘San’ (meaning ‘men with nothing’). For this reason, many modern Bushmen reject the term ‘San’ as an insult.

So, the Khoikhoi and the Bushmen led different lifestyles, based on divergent economic models. As such, conflict over water, resources and territory were inevitable. Also, the Khoikhoi were still active hunters and competition over the wild game must have been reasonably intense.
For the most part, however, the two groups seemed to find a way to get along and they co-existed as distinct cultural entities for at least 1500 years – until the Europeans came along and muddied the waters. There are even cases where Bushmen took jobs with Khoikhoi families, looking after their herds, supplying them with honey or providing rain-making skills in exchange for food.
In the Richtersveld, however, the Bushmen seem to have dissipated soon after the arrival of the Khoikhoi (apart from a few Strandloper clans who continued to live along the coast). This may have been a result of migration from or integration with the Namaqua. After all, it is not a region that can support a large population. 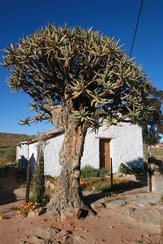 Richard Elphick, a modern historian, on the other hand, has a theory that the division between herders and hunters was much more fluid, depending as much on luck as it did on economics. For Elphick, the Khoikhoi and the Bushmen were essentially the same people.
Thus, a Khoikhoi tribe could easily lose their herds through drought, theft or disease, causing them to revert to the hunter-gatherer economy of the Bushmen.
As this was considered an inferior way of life, the ambitious Khoikhoi clan would try to rebuild its herds through theft, barter or service. This created a cyclical model of pastoralism vs. hunting.
Based on archaeological evidence, however, it seems that there were indeed two distinct groups within the Khoi-San nation.
But Elphick’s model is still useful if applied to the colonial era, when Europeans were putting pressure on the traditional lifestyles of indigenous people at the Cape.

Archaeological digs have also pointed up a connection between domesticated herds and pottery. This is because farmers need to store surplus goods, whereas hunters tend to consume things on the spot. The presence of heavy pottery also implies that the Khoikhoi did not move around as much as the peripatetic Bushmen.

This makes sense as their herds provided them with some food security, so they didn’t have to travel around as much and were able to sustain higher population densities. Nevertheless, the Khoikhoi still practised a nomadic lifestyle, moving with the seasons in search of good grazing land.

Each clan, therefore, controlled a rather vaguely defined territory and members of the clan moved across their lands in a regular, seasonal pattern of transhumance. This led to the development of portable matjieshuise or |haru oms that could be assembled at the various stockposts and watering holes which were inhabited periodically throughout the year. Occasionally, outsiders were allowed to use the clan’s land in exchange for a tribute or payment to the chief.

At no stage, however, was land allowed to be owned by any private individual. It is this ancient form of nomadic farming that is still practiced in the Richtersveld World Heritage Site.