Cave Formation in the Cradle of Humankind 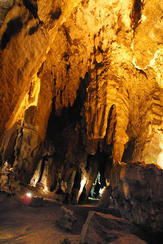 ©Roger de la Harpe
Sterkfontein Caves, Cradle of Humankind.
The entire Cradle of Humankind region is riddled with cracks and fault lines, and these facilitate the formation of underground caverns as the subterranean water table slowly dissolves the dolomite.
These cracks also allow surface water to percolate through the ground, eating away at the limestone and enlarging the caverns by creating shafts that approach the surface. Plants also ‘pump’ water through the system by sinking their roots into the rocks, increasing the rate of erosion and causing the surface rocks to crumble into topsoil. To this day, a cluster of White Stinkwood or Wild Olive trees often indicates the presence of a sinkhole or cave entrance.
When one of these shafts break the surface, soil and debris starts to fall into the cave, forming a talus cone. This cone may contain all kinds of material: stones, bones, sticks etc. Even live creatures may fall into the caves and be killed or trapped, adding their remains to the cone. This is important to note because it is unlikely that our hominid ancestors lived in many of the deeper caves, where it was cold and dark. Instead, they probably fell into the caves by accident, or they were dragged in by predatory animals who wanted a quiet dinner, or their remains were washed into the caves by water.
Over time, surface water continues to drip into the caves, collecting calcium carbonate (lime) from the dolomitic rock as it moves slowly through the fault lines. This suspension of lime in water then drops onto the material which has collected on the cave floor, replacing any organic matter (like bones) with minerals and cementing everything together into a tough, calcified substance called ‘breccia’. It is this breccia that usually contains the fossilised remains of animals and hominids and, to retrieve the fossils, archaeologists must separate the fossil from the breccia – no easy task.
But even once the caves are formed, they are not static. Instead, cave systems are constantly growing and collapsing and reforming as the Earth moves and water table rises and falls. Cave entrances also open and close over time. And sometimes the roof of the cave collapses completely and exposes the breccia, which may then get covered by topsoil and vegetation.