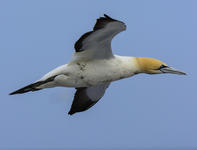 Unmistakable appearance, at 89 cm, the Cape gannet is a large white and black sea bird, with a yellow head. A long pale blue bill has black edges and a long gular stripe on the throat. This gannet has a silvery cream/blue eye.
Juveniles are dark brown and gradually turn white as they mature.

©Karl Svendsen
Greeting ritual.
Cape Gannets breed on offshore islands, with three breeding sites found in South Africa. The female lays a single egg that both parents will incubate for around 42 days. Cape gannets use their feet to incubate the egg. The webbed feet are wrapped around the egg to keep it warm. The chick is fed by both parents until it fledges at around 100 days.
Cape Gannets mate for life and perform greeting rituals at the nest, by stretching their bills upwards and gently tapping their bills together.

When hunting the Cape gannet flies at a height of between 10 and 30 m above the water, when fish are spotted, it will plunge headfirst into the water to catch the fish. The gannet can plunge as deep as 10 m under the water. The fish is normally swallowed before the gannet returns to the surface.
Gannets will plunge feed in flocks. They can hit the water at speeds of up to 100 km/hour.
Cape gannets are expert fliers, once in the air. On land, they need a runway to build up speed before they can take off.

The Cape gannet is listed as vulnerable. The main reason for their decline in numbers is due to the reduction of the fish stocks that they feed on.

Cape gannets are restricted to the coast of Africa. They will feed up to 100 km offshore.
©2022 South Africa Online (Pty) Ltd. SouthAfrica.co.za. All Rights Reserved.