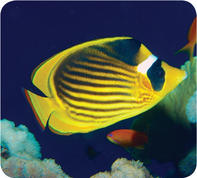 Butterflyfish can be up to 25 cm in length.

The body of the butterflyfish is oval-shaped and flat on both sides. The dorsal fin is continuous, and the caudal fin short and round. Its snout is elongated and concave in shape and holds its small brush-like teeth. Butterflyfish are bright in colour, and most are marked with a dark band across the eye. Some have colourful lines and stripes.

Butterflyfish belong to the Chaetodontidae family which comprises of ten genera and 114 species. They feed diurnally and travel far from their home range in search for food. Most can be seen in pairs, yet some form schools. They are common and characteristic fish to most coral reefs. They often become dull in colour nocturnally and are pelagic spawners.

Butterflyfish feed on coral polyps, fish eggs, small invertebrates and algae. Others solely feed on plankton. Juveniles, at times, are cleaners to other fish by picking parasites off them.