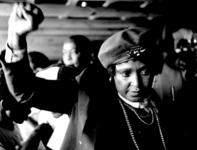 ©Eric Miller
Despite banning orders restricting her movements, Winnie Mandela continued to be active in the struggle against racial segregation. In 1969 she was arrested under Section 6 of the Terrorism Act which stipulated that anyone could be arrested without warrant and held indefinitely without legal aid if they were suspected of being a danger to law and order.
While in detention Winnie was held in solitary confinement for 18 months, the first 200 days of which was without any human contact other than the interrogation team who tortured her relentlessly. Her cell was furnished with three thin bug-infested, urine-stained blankets; a plastic water bottle; a mug and a sanitary bucket without a handle. A bare light bulb burned above her constantly, robbing her of any sense of night or day.
The torture under these circumstances was notoriously cruel. Winnie was prevented from sleeping for five days while interrogators pressed her for information. Eventually another prisoner was brought in and she watched as they tortured him. The interrogators told her that her resistance was the cause of his and other tortured prisoners’ pain.

©Eric Miller
After enduring torture for several days and witnessing the torture of another prisoner, Winnie eventually broke, promising to answer the interrogators’ questions. Her trial commenced in December 1969 and resulted in her release without conviction. A new banning order was issued to her. This one even more restricting than the last. She was not allowed to leave her house between 6 am and 6 pm.
Winnie visited her father in the Transkei before the banning order took effect. Since the last time they had spoken her father had become disillusioned with the homeland system put forward by the apartheid government. While the banning order was in effect she also went to visit her husband, Nelson Mandela, on Robben Island. The conditions of the visit were strained and being unable to speak to her husband freely, Winnie left dissatisfied.
Back at home she struggled to adjust. The police kept up with their raids and her house was routinely vandalised, burgled or bombed. Despite all Winnie had put up with to this point, her conviction in the cause became stronger and she continued to put forward the message that she would not be intimidated.

Used as a Scapegoat

©Eric Miller
Winnie was arrested again in 1973 because she met with another banned person, the photographer Peter Magubane.
Her 12 month sentence was served at the Kroonstad women’s prison, but she found the stay to be much milder and she was released six months early. When her banning order expired in 1975 it was not renewed.
She went on to become deeply involved in the Soweto Student uprisings of 1976. She helped establish the Soweto Parents’ Association and attended to those arrested and injured in the student riots.
Even though Winnie only served a supportive function in the uprisings, the government used her as a scapegoat. They arrested her and held her for five months before serving her with another banning order in 1977.

1977 was also the year Winnie Mandela was banished to the dusty town of Brandfort in the Free State. It was there that she would be forced to stay for the next eight years. Government officials told the Brandfort residents that Winnie was dangerous and that they should avoid her at all costs.
Even so, Winnie was tireless in her activism and managed to cultivate a community around her. While she was in Brandfort she started a soup kitchen, local gardening collective, mobile health unit, day care centre, sewing club and an organisation for orphans and young delinquents.
©2020 South Africa Online (Pty) Ltd. SouthAfrica.co.za. All Rights Reserved.