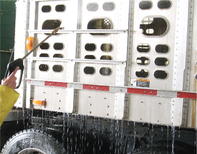 ©National Pork Board, USA
Trucks should be cleaned to prevent them from bringing diseases onto pig farms.
Various regulations and codes of practices need to be followed when transporting pigs. In summary, their aim is to prevent the spreading of diseases and to reduce animal stress during transportation.

Floors should be non-slippery and the sides should be high enough to prevent the pigs from jumping out of the vehicle.
Pigs of the same sizes and ages should be grouped together, with partitions being used to separate the different categories of pigs or to divide large numbers into small groups to avoid crushing fighting and bullying.
The pens and partitions in which the animals are kept should be large enough to permit all animals to lie down at the same time, with each bacon and small porker pig requiring at least 0,56 square meter and larger pigs requiring up to 0,74 square meters each.
While pigs usually fast during transportation, they should be provided with water within 18 hours after their journey started when travelling over long distances.
The South African Pork Producers Association’s production manual, Pigs for Profit, advises farmers to only load the vehicles once its ready to go since pigs fight when they are upset, especially when the vehicle is stationary. So get all the paperwork ready before loading the pigs.

Care should be taken to load animals with as little stress as possible. This can be done by using trained workers to load the pigs, by using the pig's natural behaviour in your favour and using loading ramps and platforms that will allow the pigs to walk freely into the vehicles. Pigs, for example, move easier when they are moved as a group. It is also easier to direct their movement when you stay in their line of vision.

Pigs for Profit suggests that farmers use a catching noose around the upper jaw of the pig when they have to move individual boars. Don’t try to move adult sows or boars alone as they are very heavy and much stronger than a man.
The loading facility should be at the same height and width as the floor of the vehicle into which the pigs will be loaded, which can be difficult if the pigs are collected with different vehicles. They may be lifted into transport vehicles, but this can be difficult and result in injuries. Animals may not be dragged by their legs or lifted or carried by their head, ears or tails.
Drivers of the motor vehicles should be good with animals. They should drive as smooth as possible to prevent the animals from falling over, bumping into one another and causing injuries. The vehicles should only be stopped when absolutely necessary and a pre-arranged contingency plan should be developed before trips in case of emergencies or breakdowns. The drivers should be trained to know what to do in an emergency and have cell phones to contact someone if they need help.