In 1980 on my initiative some of the leaders of the South African Council of Churches and of member churches went to see Mr P W Botha who was then Prime Minister and his senior Cabinet colleagues. We were trying to make them understand that unrest would be endemic in South Africa unless its root cause was removed - and that root cause was apartheid.

We declared then that we knew that policies was the art of the possible and did not want to suggest they do anything which would erode their support among their constituency.

And we put forward four items of things which, if they were done would be a dramatic demonstration of the Government’s intention to effect real political change leading to political power sharing. Remember this was in 1980.

We said: Declare a commitment to a common citizenship for all South Africans in an undivided South Africa; Abolish the Pass Laws (even a phased abolition to avoid chaos), detention without trial and arbitrary banning; Stop all forced population removals immediately; and Establish a uniform education system.

One South African to Another

These were not wild radical demands and if the Government had implemented them then we would have been saved a great deal of anguish, bloodshed and the loss of property and an increase in bitterness and hatred and anger. We were criticised in the black community for going to the Government.

These were much the same conditions I had mentioned in my 1976 letter to Mr Vorster. But you know what happened? These were ignored.

Despite all this, I tried again a year later to see the State President, to talk with him as one South African to a fellow South African, as one grandfather to another, as one Christian to another in the hope that he would act as only he could, the one white South African for whom blacks would have been ready to erect a statue as the man who would have gone down in history as having presided over the dissolution of apartheid and the emergence of a new, a more equitable, a just, a non-racial and truly democratic South Africa. 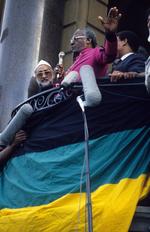 He turned me down. In parenthesis, I might add that I have said he needed to be commended for his courage in telling whites that there was no way in which they alone could determine the future of this country forever. Sadly he did not go far enough and so ended up pleasing neither the blacks nor his so-called right wing.

To turn an English expression around, we see the sad spectacle of a man who did not have the convictions of his courage. Yet I was ready to go to Alexandra Township (in February 1986) to help defuse the tense situation there and to go in a delegation to Cape Town to talk with the government about that situation and the situation in the country.

In 1984 far from heeding our calls for negotiation leading to power-sharing, the Government introduced a Constitution which was the climax of the policies of exclusion to which blacks had been subjected since 1910. Seventy-three percent of the population was excluded from any participation in this monumental hoax designed to hoodwink the international community that apartheid was being reformed. Apartheid is irreformable.

It must be destroyed before it destroys our country. That constitution was meant to entrench white minority rule with the co-opted help of so-called Coloureds and Indians, collaborators in their own and our oppression and exploitation.