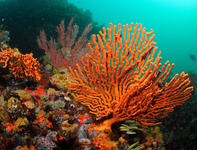 Sea fans can measure up to 5m.

The name ‘sea fan’ derives from the erect, flattened soft corals which branch to look similar to a fan. They are characterised by the manner in which they branch. Sea fans vary in colour but are predominantly red, yellow and orange.

Sea fans belong to the Gorgonacea order, which is one of the four orders of Octocorralia. This includes sea pens, soft corals and sea whips. Their skeletons differ in their horn-like appearance. Polyps have eight tentacles which look soft and furry when stretched out. Some species have zooanthellae which aid their food production. Pygmy seahorses and brittle stars often occur on sea fans. They reproduce by spawning.