Mammals of the Richtersveld

©Jacques Marais
In terms of mammalian predators, the Richtersveld contains brown hyenas, aardwolfs, caracal and leopard (although these are very rare). You also get black-backed jackals, the Cape Fox, the bat-eared fox, the African wild cat and striped polecats (also called the zorilla).
Other mammals include meercats (suricates), small-spotted genets and several species of mongeese (or is that mongooses?). Primates are represented by chacma baboons and vervet monkeys (found mainly along the banks of the Orange River).
Bats, shrews, rats, mice, rabbits and gerbils are reasonably common in the Richtersveld. These include the striped field mouse, karoo bush rat, Brant’s whistling rat (!), round-eared elephant shrew, striped mouse, long-tailed pygmy mouse, Namaqua rock mouse, tree rats, Cape hare, Smith’s red rock rabbit, ground squirrels, Namaqua dune molerat, common molerat, rock dassie (hyrax), dassie rat (which is not related to the dassie) and porcupines. Gerbils include the Namaqua short-tailed gerbil and the hairy-footed gerbil. There are also a high number of bat species.

©Jacques Marais
In terms of reptiles (scaly) and amphibians (slimy), herpetologists will be delighted with the variety of species that slither and crawl through the Richtersveld. These include the world’s smallest tortoise, the Namaqua or speckled Padloper (adults measure around 100mm long). You also get the angulate (or geometric) tortoise and the Namaqua tent tortoise. Lizards include the large Nile Monitor (or waterlikkewaan), Karoo girdled lizard, armadillo girdled lizard, Smith’s desert lizard and the rare Cape flat lizard.
In terms of chameleons and geckos, you get the unusual Namaqua chameleon (which prowls the gravel plains, instead of living in trees), Namib web-footed gecko, giant ground gecko, Smith’s desert gecko, Austin’s dune gecko, the recently discovered leaf-toed gecko, as well as a couple of skinks. For its size, this area represents one of the richest gecko faunas in the world.
Snakes are relatively rare, but those that are present are pretty potent. These include the black spitting cobra and a variety of desert adders (puff adder, horned adder, desert mountain adder and Namaqua dwarf adder). 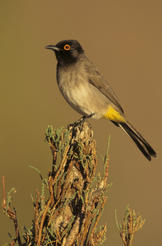 ©Nigel J Dennis
There are not many amphibious species in the Richtersveld, as these animals usually require water for breeding. Nevertheless, there are 8 species of frog, most of which are known to bury themselves under the sand and emerge only after good rains. These include the Karoo toad, the endangered Namaqua rain frog and the recently discovered Paradise toad. The sudden appearance of frogs after a heavy rainfall has given rise to a local legend that the frogs are actually transported into the region by the clouds that drift in from the sea.
Additionally, various bird species (197) have also been identified within the |Ai-|Ais/Richtersveld Trans-frontier Conservation Area. These are found mainly on the banks of the Orange, along dry river beds and in the mountain ranges.
They include the Lanner falcon, Black eagle, Southern pale chanting goshawk, spotted eagle owl, blackbreasted snake-eagle, African fish eagle, Cape eagle-owl, jackal buzzard, rock kestrel, Cape spurfowl, bokmakierie, Namaqua sandgrouse, Cape bunting, Diderick cuckoo, redchested cuckoo, African hoopoe, the Cape bulbul, Redeyed bulbul, tractrac chat, mountain chat, longbilled lark, dusky sunbird, swallowtailed bee-eater, redknobbed coot (which sounds like a dirty old man), fierynecked nightjar, pied kingfisher, various swifts, a couple of swallows and several incongruous ostriches (which are now part of a large-scale agricultural breeding project).