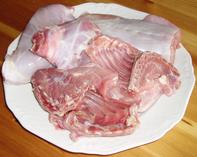 © Garitzko
Make sure you have an abattoir that will be able to humanely slaughter your rabbits.

After slaughtering, the rabbit carcass should be hung head down so that the stomach, just below the genitals, is at eye level. Hang from thin, sharp hooks that pierce the hind legs between the Achilles tendon and the bone just above the hock joint.
Using a sharp, 12 cm skinning knife, slit the skin around each back foot at the level where it has been pierced by the hook. Insert the knife under the skin at the inside rear of the leg and open it up to the root of the tail at the tail side of the anus. With your fingers, work the skin away from the flesh of each thigh.
Push the tail back and sever the bone so that the tail remains attached to the skin at the back, and the genitals and rectum are on the stomach side. Continue to work the skin away from the body downwards, like a sock turning inside out, pulling down the back at the tail end, and prizing it free from the stomach with your fingers at the front until you can slip your hand between the belly and the skin. Now cut the genitals from the skin at the front so that they remain attached to the rectum and the body between the back legs.
The skin can now be peeled down unimpeded – take care not to rupture the muscle line down the centre of the belly. Work the forelegs free up to the feet so that only the paws and the head are still contained within the peeled skin sock. Now cut through the joints of the front paws, and cut off the head as high up the neck as you can. The skin, still with front paws and head attached, is put aside to work on once you have finished preparing the carcass.
Make a small slit down the centre of the belly line that does not puncture internal organs. Carefully open the slit upwards to just below the genitals. Now cut through the cartilage on either side of the genitals and rectum taking care not to rupture the pipes to the bladder and stomach.
Spread the slit downwards to the diaphragm and remove the viscera with bladder intact, taking care not to break the gallbladder or the liver, which should be immediately removed. Now part the diaphragm membrane to access the lungs and remove together with the trachea (throat pipe).
Cut the skin around the head and let it drop out of the sock for skinning. The liver, kidney, heart and lungs, are all edible - even regarded as delicacies - so store them and use them as you like. Remove the hind feet by cutting through the hock joint in a way that leaves the ligaments holding the thigh muscles to the joint intact.
Once you have cleaned the carcass with a damp cloth it is ready for portioning or for trussing. To truss a rabbit, bend the hocks forward into the chest cavity and diaphragm. Then pull the flank flaps over to give a neat rounded appearance.