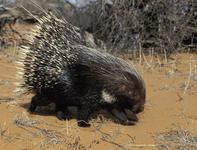 Female porcupines are about one kilogram heavier than males, weighing 10-24 kg and males with a mass of 10-19 kg. Both sexes are about 84 cm in length. The African porcupine is the largest rodent in the regions they inhabit. They are covered in flat, prickly hairs, and have sharp quills of up to 30 cm long and spines of 50 cm on their flanks and back.
Porcupines erect their white and black coloured spines and quills using muscles under their skin, making them appear much bigger and threatening. Some spines on their tails are hollow, making a rattling sound when shaken. Their sharp spines and quills can fall off when coming into contact with a predator but grow back quickly.
The African porcupine looks similar to the echidna but is not closely related. The echidna, also known as they the spiny anteater, is a type of monotreme covered in sharp, rigid spines and long, bristly hairs. The African porcupine is twice the length of the echidna, which measures about 47.5 cm.

African porcupines are largely herbivorous, digging out bulbs, roots and tubers with their strong claws. They also feed on fallen fruit and bark and have been reported to eat carrion at times. Their food and undigested plant fibres are broken down in the large intestine and enlarged appendix which contain microorganisms.
When deficient in phosphorus they chew on bones, a habit known as osteophagia, and collect them in their dens.

After a gestation period of three months, a litter of one to four young is born, weighing about 311 grams each. They are relatively well developed at birth, having teeth and their eyes open. They also have soft quills at birth relieve the mother’s birthing, and dry and harden in the air.
The mother gives birth in a chamber lined with grass in the den during the wet months of August to March. She nurses her young for about three or four months until they are about 4-5 kg in weight. They grow fast and are full-grown in a year. The female cannot conceive for another 3-5 months after weaning her young.
Male porcupines are sexually mature between 8-18 months of age, whereas females between 9-16 months. Females initiate mating due to the porcupine’s dangerous anatomy, and they have no specific breeding period in South Africa.

Porcupines are primarily nocturnal, feeding at night and sleeping during the day, but can be seen at daytime. They have sharp hearing and will stay stock still when approached by a predator. Porcupines fall prey to hyenas, big birds of prey and big cats.
When threatened or cornered, they react aggressively by running sideways or backwards to stab their attacker with their quills. The porcupine cannot throw or shoot its quills, contrary to popular belief, but they become dislodged when shaken to make a rattling sound. They also defend themselves by hiding in their dens, facing inward and erecting their spines so they cannot move.

African porcupines prefer rocky outcrops and hills as their habitat, needing shelter in the day. They often take cover in aardvark holes or caves. They can be found from areas at sea level to 2000 m above where there is vegetation. Porcupines build dens that can have a living chamber of 20 m and 2 m deep.

Porcupines can be found in South Africa, East Africa and North America.

The porcupine has five toes on its forefeet, the first toe being a small stump with no claw. The other toes have well-developed claws, and each toe on the hind feet has a claw. The spoors of the fore- and hind feet show two proximal pads and three intermediate pads.

The Cape porcupine is the largest rodent in Southern Africa and is characteristically equipped with long, sharp quills, that are actually modified hairs, which it uses in defence...more

Fast Facts About the Cape Porcupine