A Symbol of Anti-Apartheid 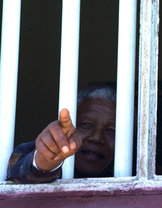 For the South African ruling whites, Nelson Mandela was a forgotten figure. This was also the case in the rest of the world: in the year of the first Rivonia Trial the New York Times published about a dozen reports in which the Mandela name featured; the next year, it appeared only once, and that was with regard to Winnie Mandela.

She went on courageously working to keep his name and cause alive, and in doing so incurred the hatred of the Security Police. At some stage, a decision was seemingly taken by the Congress Alliance leaders abroad to focus public attention on Mandela: his strengths were recognised and made him a desirable icon. It took time but gradually his name came to the forefront and came to symbolise the anti-apartheid struggle.

This showed itself in strange little ways: on a summer's Saturday afternoon, I drove to the Central Post Office in Johannesburg to send a registered letter to Mandela in prison. A black man was the counter clerk. He was tired and hot and sprawled across the counter, his head resting on his arm. I handed the letter to him, he gave it a bored look — but, as he saw the name, he came alive in an instant. He sat up, his eyes shining, and gave me impeccable service.

During the 1970s and early 1980s the apartheid government began to wake up to Mandela's importance as a leader. As he grew older the government feared he would die in prison and become a martyr figure to rally worldwide opposition to apartheid. Overtures were made to him for his release by his nephew, Paramount Chief Kaiser Matanzima, and Johan Coetzee of the Security Police.

The condition was that Mandela had to agree to leave South Africa itself and live in the Transkei, the so-called independent bantustan headed by Matanzima. Mandela refused. Mandela and five of his closest colleagues were transferred from Robben Island to the easier conditions of Pollsmoor prison on the mainland. From early in 1985, cabinet ministers began to visit him for secret meetings and he was taken to see President P. W. Botha.

After years of making written applications, I was finally allowed to visit him for 45 minutes. I was told I was being allowed to see him as a friend, not as a journalist, and had to promise I would not write about it. That was hard for me, and I also had to get my Rand Daily Mail colleagues to accept it.

I had already got to know Mandela's security warder, Warrant Officer James Gregory. Over the years, starting with Robben Island, my wife, Anne, and I had sent parcels of food delicacies for Mandela at Christmas time. Then, one year, I was told it would have to be shared with every prisoner on the Island.

I phoned prison headquarters and an officer confirmed this. 'Do you mean that if I send one kilogram of sweets you will distribute them among 1 400 prisoners?' I asked. 'Yes,' was the answer. That was clearly absurd but instead, from then on, we were allowed to send money which was credited to Mandela's prison account.

In time, we did the same for Mandela's colleagues, Walter Sisulu and Govan Mbeki. I was told that, at Christmas, they could write lists of the food they wanted and warders would go to the nearest supermarket to do the buying. On our annual holiday in Cape Town, we drove to Pollsmoor prison to leave gifts. I dealt with Gregory and he was always polite and helpful.

At home in Johannesburg on Saturday morning, Winnie phoned in a state of distress: she had been told that Mandela had cancer and wanted me to attempt to verify the rumour immediately. I phoned Pollsmoor and got hold of Gregory. He assured me there was no truth in it; he had seen Mandela only a short time before and he was well and had had a good breakfast.

Gregory asked me to tell this to Winnie and added how terrible it was that there were people who spread rumours like this. I thanked him and asked him please to convey my best wishes to Mr Mandela and he said he would do so. It was surreal and hard to believe I was talking to a warder about the country's No. 1 prisoner. I put down the phone and said to Anne, 'That is one of the maddest phone conversations I have ever had.'

In preparing to visit Mandela I made up my mind that I would say whatever I wanted and would not allow any censorship. I was admitted to Pollsmoor prison and was welcomed by Gregory: he said how excited they all were by the visit. I suddenly realised mine was a trial visit — the authorities wanted to see what happened because for many years only family members had been allowed to see Mandela. I panicked and blurted out that of course, I would go along with whatever the rules might be.

Don't worry, said Gregory; the 'Old Man' knew what was allowed and we were not allowed to talk about prison conditions. It was a special moment in my life: I sat on a stool in front of a large sheet of glass and in walked Nelson Mandela, his hands held high and calling out a greeting.

He sat on the other side of the glass and we spoke through loudspeakers, giving our voices a disembodied tone. He was grey-haired and his face was lined. But he held himself erect and he looked as robust as when I had last seen him, more than two decades before. I was struck by his gravitas.

This was a man who had endured and had become serious and deeper in the process. He spoke with authority. He was polite to Gregory and Gregory was polite to him, but Mandela, prisoner though he was, was the man in charge.

He had prepared a list of topics for our meeting: he wanted me to help clear the way for the education of two of his daughters, and he wanted to know about a range of old friends. He asked me to tell Dr Harold Seftel, an expert in African medicine, whom he had known when they were students at the University of the Witwatersrand, that he listened to his daily health talk on the radio.

I had to tell Seftel that Mandela was following his advice and had cut down on his salt intake. It was a small world because not only did I know Harry Seftel, but his sister, Dolly Levine, was a close friend who had introduced Anne and I — a 'shidduch' in Yiddish — and she maintained a proprietary interest in our marriage and children.

Later, I phoned Seftel with Mandela's message and he excitedly thanked me, 'It's a mitzvah [blessing] you are giving me, it's a mitzvah.' Mandela asked me to visit again, for double the time, but said he would not see me unless Anne came along too. They had never met — we married after his imprisonment — but he said he had a photograph of her on his cell wall.

Anne and I did visit, in January 1986, a few weeks before emigrating to Britain, and this time Mandela's authority was even more marked. We had a contact visit in an office and the prisons colonel who sat behind the desk taking notes was clearly only formally in charge. This time I had to give a written undertaking in advance that I would not write about the visit.

The South African government announced on a Friday that Mandela was to be released the next day. On Saturday, I had to attend to the repair of a chair at a small antique shop near our home in West Hampstead, London. I walked in and said cheerfully to the owner, 'Wonderful news that Nelson Mandela is being released today.

' He spat back at me, 'He's a terrorist. He should be strung up.' It was an ugly moment but did not reflect British popular opinion of the time. I spent the rest of the day at Sky TV, providing a running commentary on the amazing images beamed from outside the Victor Verster prison in the countryside and then from Cape Town's Grand Parade where Mandela spoke to a crowd of many thousands.