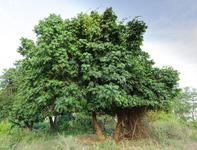 Natal Mahogany (Trichilia emetica)
The Natal Mahogany is an evergreen tree that can reach a height of 20 m. It bears a wide spreading crown, creating dense shade under its branches of shiny, dark green leaves. It has sweetly fragranced flowers growing in thick bunches, which are a creamy green in colour. The bark varies from dark brown to grey, and is smooth to the touch.
The nectar attracts birds and bees. When the fruit of the mahogany tree matures, its splits open and birds can access its red and black seeds. A tree will at times only bear male flowers, and will therefore never fruit.

The tree blooms between the months of August and November, and carries fruit from December to April. A variety of animals feed on the flowers and fruits of the mahogany tree.Monkeys eat its flowers, whereas baboons and antelope feed on its fruit. The seeds are eaten by certain birds.
Local people create a milky substance of the seeds by soaking it in water, which is often then enjoyed with spinach. Oil is extracted from the seeds for cosmetic use and healing bones. The bark is used as an enema or emetic in its powdered form. A pink dye can also be made from the bark. The wood of the Natal mahogany is used to make musical instruments, household implements, bats, furniture, canoes and for carvings.

The Natal mahogany can be found in South Africa growing in KwaZulu-Natal and Limpopo Provinces. It grows in open woodlands and riverine bush, stretching as far north as Sudan.

The outer coat of the Natal mahogany seed is poisonous, although its inside is edible.
©2022 South Africa Online (Pty) Ltd. SouthAfrica.co.za. All Rights Reserved.