The Purpose of Irrigation Scheduling 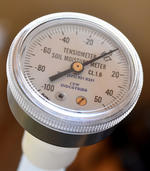 It is important to know the moisture condition of the soil so that the grower can irrigate the plant at the correct time to ensure that there is the required available moisture in the soil for the plant’s roots to draw from.

To measure the soil and ensure that the crop does not suffer unnecessary stress and loss of production due to a lack of water available in the soil for sustainable plant growth, different methods and instruments are employed to monitor the soil and the most common used for irrigation scheduling purposes are:

The Neutron Probe Meter measures soil moisture by scattering neutrons in the surrounding soil. The instrument consists of a probe at the end of a cable that leads up to the rate meter box. The probe contains a fast neutron source, which may be a mixture of radium and beryllium or Americium and beryllium.

Aluminium access tubes of 500 mm to 1 000 mm long and 32 mm in diameter with closed bases are placed in the field where the moisture readings are to be taken. For shallow root crops and annuals, shorter tubes would be used than those used with deep rooted or perennial long term crops.

The neutron probe gets lowered into the access tube to the required depths and fast neutrons are released from the probe. The neutrons then scatter into the soil. When these neutrons encounter the hydrogen atom of water, the speed of the neutrons is reduced and the rate meter counts the number of slower neutrons. The number of slowed neutrons is proportional to the water molecules in the surrounding soil. By inputting this information into the software the moisture content of the soil is known from a calibration curve showing the counts of slowed neutrons.

Pros
Measurements are quick and continuous. Using a Neutron Probe does not require the soil to be disturbed and can measure a larger area (200 mm to 400 mm around the probe tubes) than other methods.

Cons
Using a Neutron Probe is expensive, uses a radioactive source and requires regular maintenance by specialized personnel. An accurate reading of the moisture content from shallow soils is problematic because the fast neutrons can be slowed down by other hydrogen atoms in organic matter as well as by atoms of trace elements normally present in the top 200 mm of soil. This results in the overestimating of soil moisture content.

These rectangular resistance units or blocks are about 550 mm long, 375 mm wide and 20 mm thick. Gypsum, clay or plaster of Paris blocks are used for the measurement of soil moisture by placing the blocks at the exact location in the soil that needs to be measured and monitored. A pair of electrodes is built 20 mm apart into the blocks.

This measurement method works on the conductance of electricity. When an electric current is passed through the two electrodes the resistance to the flow of electricity is proportional to the moisture content in the block. When the block is wet, the conductivity is high and therefore the resistance is low. Generally, the electrodes read about 400 to 600 ohms resistance at field capacity and about 50 000 at wilting point, which is when the plant can no longer draw the required water from the soil to sustain itself. The readings are taken with a Wheatstone Bridge Bouycos water bridge with dry cells.

Cons
Gypsum blocks are not very reliable in wet soils.

A tensiometer is an instrument that measures the tension at which water is held by the soil. It consists of, at its tip, an 8 cm porous ceramic or clay cup attached to a protective metallic or glass tube with a vacuum gauge at the top. The system is filled with water from an opening at the top of the tube and will saturate the porous clay tip. It is then corked by the vacuum gauge when set up in the soil.

Install the tensiometer by drilling a hole just wide and deep enough to fit the tube in the active root zone of the crop. There should be no air cavities around the tip or tube. It should be a tight fit. Moisture from the cup will be drawn out with drying of the soil around it. This creates a vacuum in the tube which is measured by the gauge. When the desired tension is reached, the soil should be irrigated. The vacuum gauge indicates the tension values up to one atmosphere but only reads up to 0.85 atmosphere.

Pros
A tensiometer is simple and easy to install and to read soil moisture in situ. It is useful for scheduling irrigation on crops that require frequent applications at low soil tension.

Cons
Sensitivity of a tensiometer is only up to 0.85 atmospheres while available soil moisture range is up to one atmosphere. A tensiometer is also more accurate on sandy soils than heavy clay soils.

If none of the above-mentioned methods are available, this practical estimate of moisture content can be used as a last resort of soil samples taken from the desired depths. The soil sample is squeezed in the hand and its feel and appearance are taken into consideration. By using this method, accurate actual soil moisture content cannot be determined. 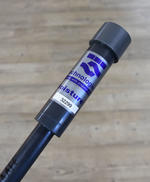 ©Louise Brodie
TDR moisture probe head.
TDR probes are a new method being used in the scheduling of irrigation. The method measures the time it takes for an electrical pulse to travel the length of stainless steel rods inserted into the soil. TDR probes are normally used in greenhouses and are very accurate. They are, however, an expensive system to use on a large scale.