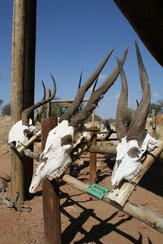 ©David Fleminger
By 1250 AD, Mapungubwe was at the peak of its power. About 5000 people lived around the hill, and this qualifies it as Southern Africa’s first town.
Several other settlements had also been established some distance away from the capital (the most important being Mmamagwa in Botswana), and this suggests that Mapungubwe was also Southern Africa’s first state.
Pottery remains of the distinctive Mapungubwe culture have been found over an area of 30 000 square kilometers, approximately the same size of the old Zulu kingdom and present day Lesotho.
With all this additional responsibility and extra administration to handle, the king seemed to retreat even further into his isolation.
Around 1250, a series of stone walls and enclosures were thus built on the summit to enhance the privacy of the royal personage.
By removing himself from the populace, the king also removed himself from the day-to-day life of the community.
In other cultures, justice was traditionally the domain of the chief, but at Mapungubwe, courts were located at the foot of the hill.
The king wouldn’t have been caught dead walking among the great unwashed, so a brother of the king probably presided at these courts and dispensed justice on behalf of the ineffable authority that lived up on high.

King of the Hill

©Jacques Marais
Excavations on top of the hill have been ongoing since the 1930s, and it is currently thought that there are two stages in the development of the royal enclosure. The ‘First King’ lived on the north western end of the hill, where a series of house floors have been identified. These are characterised by round holes which were cut into the rock to support the poles for the huts. There are even several circular grooves in the hill top which were made by the hut walls.
Huffman describes the layout of this complex as follows: “One unusual structure had a wide veranda with two fireplaces (called ‘curbs’) on either side of a seat. The veranda surrounded a small room with a clay floor so hard and well-made that early excavators called it ‘cement’. Another house with the burnt remains of a carved wooden door stood opposite the fireplaces.
If these structures followed the later Zimbabwe pattern, then the hut with the door was the king’s own sleeping room, while the king’s special diviner would have used the small hut with the exterior fireplaces. Somewhere nearby would have been an audience chamber where the king received visitors in a formal setting. Finally, the king’s chief messenger would have kept an office towards the front where he could receive the visitors first.”

©Roger de la Harpe
Around 1250, however, this little arrangement was no longer deemed suitable for the ‘Second King’, and the royal village was moved to the middle of the hill. Stone walls, precursors to the mammoth constructions at Great Zimbabwe, were built to make this palace more substantial, and to enhance the ritual separation of the king.
Huffman, following the later pattern of Great Zimbabwe’s elite, suggests that the king was now isolated by a series of intermediaries; a senior messenger would meet visitors and take them to the king’s diviner to see if they had any evil intentions. If cleared by security, an audience would then be granted with the king, who probably sat on one side of the royal courtyard, screened off from view by a wall or screen.
A small contingent of guards (the ‘eye’ of the king), musicians and praise singers may have also lived on the hill – as is indicated by the remains of Mancala game boards, carved into the rocks. Excavations have shown that one or two favoured wives probably lived in the back section of the palace, while the other wives lived in a settlement at the base of the hill. A ritual area for sacred objects and rainmaking is thought to have completed the king’s ivory tower.

However, apart from the radical new layout, not much else had changed from the days at K2. The people were still practising a mixture of subsistence farming (probably supported by villages closer to the river) and stock farming (there is faunal evidence of domesticated cattle, sheep, goats and dogs). Remains of storage huts show that they stockpiled millet, sorghum and cotton. But it was a manufacturing and trading centre that Mapungubwe excelled.By David Fleminger
©2022 South Africa Online (Pty) Ltd. SouthAfrica.co.za. All Rights Reserved.