©Roger de la Harpe
Around 1220 AD, the people of K2 decided to move to a better neighbourhood. Things had been going well for them, what with their burgeoning trade network and their prosperous fields. And the time had come, they felt, to create a capital that more appropriately represented their upward mobility.
This relocation was not just a matter of New Money trying to show off. It was indicative of a sea-change within the society. As Thomas Huffman (an archaeologist working at Wits University) puts it, “The enormous wealth generated through the Indian Ocean trade resulted in an unprecedented inequality, and ruling families became an upper class. In addition, a growing population, supported by floodplain agriculture, would have helped to intensify the existing social differences. By 1220 AD, K2 society had transformed from one based on social ranking to one based on social classes.” Trust money to mess everything up!

What’s in a Name?

©Roger de la Harpe
The site they chose for their new capital was a long, flat-topped hill, located just a short distance to the north east of K2, on the other side of Bambandyanalo Hill. It was a sheer-sided outcrop of sandstone measuring 30 metres high, 300 metres long and between 15 and 50 metres wide. The banks of the Limpopo River were about one kilometre to the north.
We do not know what they called this hill. The modern name, ‘Mapungubwe’, was derived from a blind old man named Mowena, who first pointed out the hill to white eyes in 1931. As the word does not clearly belong to either the Sotho, Shona or Venda languages, it is hard to determine its exact meaning. The most common interpretation is ‘place of the jackals’, from the Sotho word pungubye and the TshiVenda word punguvhe, both meaning jackal.
The jackal in question is thought to refer to the powerful ruler who lived there. The Lemba tribe, however, translate the name as ‘the place where rock flowed like a liquid or water’, and this could refer to the ancient’s ability to work with molten metal. It could also mean ‘place of wisdom’ according to Matole Matshekga, head of Kora Heritage Institute. And others believe that it is associated with the Shona suffix–bwe, as in Zimbabwe, which is taken to refer to ‘venerated stones or houses’.

A Good Place for a Capital

©Photo courtesy of Mapungubwe Museum, Pretoria University
Whatever they called it, the hill was a good place for a capital. The sides were very steep, and there were only four precipitous ascents to the top, all of which could be easily defended. Yet, despite the inviolability of this natural fortress, it was not primarily chosen to keep invading tribes at bay. In fact, there is no evidence to suggest that the people of K2 were at war with anyone and the entire period seems to have been uncharacteristically peaceful.
Instead, the hill was probably chosen to keep the commoners out. By this time, social stratification within the K2 culture had reached such a heightened state that the royal entourage felt that they should be physically separated from their subjects. Accordingly, the paramount chief, his immediate family, advisors and bodyguards moved into houses built on top of the lofty hill. Commoners then settled into new huts that were built on terraces around the foot of the hill. Talk about ‘king of the castle’. 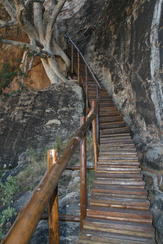 ©David Fleminger
The social distinctions within the K2 community thus became spatial distinctions. This was the first time in African history that such an attitude had become manifest – although it would certainly not be the last. An appallingly long list of African dictators have since followed the Mapungubwe example and set themselves up in gilded isolation, far from the cries of their followers. The same could be said of the European kings, for that matter. Or any modern autocrat.
It is unclear whether the new dispensation at Mapungubwe was the will of a particularly powerful king, or whether it was part of a collective decision to entrench the class distinctions of society. It may have also had spiritual resonances, as it is thought that the hill was associated with rainmaking and other sacred functions which were the preserve of royalty.
In any event, the system seemed to work and the Mapungubwe culture thrived for the next 75 years. This short but glamorous ‘Gold Period’ was only as long as the reign of one or two kings, maybe a couple more, but in that time, the people of Mapungubwe were very busy.

©Roger de la Harpe
The first thing that had to be done was to prepare the hill for the king. Dozens of tons of soil were carried up the hill and used to level out the uneven rock surface. Huts were then built for the king’s entourage (family, counsellors and guards), and the access routes to the top of the hill were prepared.
On the main ascent, the one that is still used by modern tourists, notches were cut into the rock and short poles were slotted in, to act as steps. They also defended these access routes with piles of rocks which could be thrown down on the heads of any unwelcome visitors.
At the foot of the hill was a ring of houses for the lesser-royalty, and beyond that lived the commoners, accommodated in a number of residential areas that sprawled across the terraces. Each ‘suburb’ would have had its own chief or headman. Archaeological evidence has shown that there was already a small village at Mapungubwe prior to 1220, and this was probably burnt down and rebuilt to house all the people coming from K2.
The practise of burning down old huts when they were becoming unstable, and then building new huts in the same location was common throughout the region. The deep deposits found on the southern terrace of Mapungubwe show that this happened a number of times during the rapid growth of the capital.By David Fleminger
©2022 South Africa Online (Pty) Ltd. SouthAfrica.co.za. All Rights Reserved.