©Glenneis Kriel
Piglets suffering from heat stress will be less active than normal.
Pigs are highly sensitive to hot and cold climatic conditions. The ideal temperatures at which they should be kept will depend on room temperature, relative humidity, the age of the pig, the breed, the type of flooring and housing. As a rule of thumb though, adult pigs thrive at temperatures above 15 degrees celsius and below 30 degrees celsius.
It is very hard for pigs to cool themselves down. They are unable to sweat, have small lungs in comparison to their body size and have a thick layer of fat that insulates them from the cold. Genetic improvement has worsened the problem, according to Alltech, resulting in today’s breeds producing more than 30% internal heat from respiration and metabolism than pigs in the early 1980s.

©Glenneis Kriel
Pigs struggle to cool themselves down.
Heat stress is a great challenge in South Africa, because of our warm climatic conditions, which are bound to get even warmer in future, due to climate change. Farmers, therefore, have to consider the climatic conditions of the area where they want to raise pigs and develop a strategy to prevent heat stress before they start farming with pigs.
Failure to do so will have a negative impact on feed intake, growth rates, milk production of sows and may even influence reproduction, by causing infertility. Heat stress may also result in fluid imbalances, which can lead to diarrhoea and under severe cases death. Heat stress can also render a pig to be more vulnerable to diseases.
Pigs affected by heat stress or heat stroke will have a high respiratory rate and will be less active, in other words, keep lying down, in an attempt to generate less energy and cool down. Under severe cases they may become weak, their muscles may start trembling and they may vomit or suffer from diarrhoea. 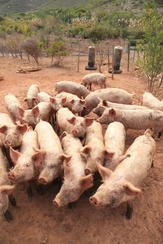 ©Glenneis Kriel
Hardier breeds might be a better option if the pigs are produced outside.
Farmers in modern facilities use climate control to adjust room temperatures and humidity levels. If you do not have access to these technologies, design your piggery to be cool in summer through strategic placement and the use of insulation.
Corrugated iron roofs, for example, may be covered with leaves or grass to reduce temperatures. Farmers can also put sprinklers on top of the roofs of houses to cool the houses down during heat waves.
The impact of the floor type should also be considered, with some floors generating more heat than others.
According to The Pig Site, a 5 kg pig kept on straw, for example, would thrive at temperatures between 27 to 30 degrees celsius, but at 39 to 32 degrees celsius if kept on slatted floors.
A 90kg pig kept on straw would have to be kept at 11 to 22 degrees celsius, but at 15 to 24 degrees celsius if kept on slatted floors.
If the pigs will be produced outside, it might make sense to choose a hardier indigenous breed that is able to withstand warmer climatic conditions. Pigs with black skins are also less vulnerable to sunburn.
Pigs that are kept outside should have access to shade and shelter. Mud puddles will also help to cool pigs down and offer partial protection against sunburn.

©Glenneis Kriel
Sprinkling water over pigs or a mud bath may help to relieve heat stress.
Only a few hours of exposure may have a negative impact on production, so pigs should be cooled down as soon as possible when climatic conditions rise above the ideal temperatures at which they should be kept. Reducing pig numbers may also help, as overcrowding will worsen the situation.
Steps should be taken to maintain feed intake. Alltech suggests farmers keep the feed fresh, reduce the crude protein content of the feed, use fat and oil for instant energy, increase the nutrient density of feed or give the pigs wet feed to encourage intake. Food should also be given during the cooler times of the day.By Glenneis Kriel
©2021 South Africa Online (Pty) Ltd. SouthAfrica.co.za. All Rights Reserved.