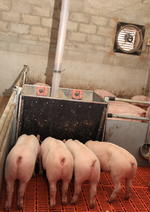 ©Glenneis Kriel
New food or food ingredients to be introduced gradually, to prevent stomach upsets in pigs of any age.

Diarrhoea in pigs is a serious problem that can result in their death if left untreated. Farmers should look for signs of diarrhoea, such as loose dung that is pasty to watery, before cleaning a house.

The dung may be slimy, grey, yellow, green, bloody and smell abnormal.

According to the production manual of the South African Pork Producers Organisation (SAPPO), Pigs for Profits, diarrhoea is usually seen in piglets, but may occur in pigs of any age.

It is generally caused by a change in diet, over-eating, weaning stress, diseases or internal parasites.

To prevent weaning stress and young piglets from over-eating, Pigs for Profits advises farmers to give sows a healthy balanced diet to ensure they have enough milk for each suckler. Piglets should be given small amounts of solid food from 21 days old, or at least ten days before weaning, to make them used to solid food. Feed should be restricted during the first few days of weaning to prevent the weaners from overeating. New food or food ingredients should be introduced gradually over a week or so, to prevent stomach upsets in pigs of any age.

Diseases that can Cause Diarrhoea

Pigs for Profit identifies the following diseases as common causes of diarrhoea:

Colibaccilosis is caused by an overgrowth of the bacteria Escherichia coli (E.coli) and affects piglets during the first three weeks of life and weaners. Affected piglets usually have creamy or yellow to grey, slimy watery diarrhoea that may be tinged with blood. The piglets tend to lose their appetite, become less active and may die from dehydration. The disease may also cause sudden deaths, with no apparent symptoms of disease.

Colibaccilosis develops when young piglets do not get enough colostrum (first form of milk produced by mammals immediately following delivery of the newborn) within the first three hours after they were born or when they do not get enough milk form the sow. So care should be taken to ensure they receive enough colostrum within the first hours after they were born and sows should be on a balanced diet to ensure they produce enough milk. Stress caused by weaning, a change in diet or the mixing of pigs from different litters, especially when they are different sizes, may contribute to the problem in older piglets.

This problem may be overcome by giving piglets small volumes of creep feed from 21 days onwards, to get them used to food and by restricting feed during the first few days of weaning. Sick pigs should be treated with antibiotics and be given lots of fluids and electrolytes to prevent dehydration.

Rotavirus is a viral disease that causes watery diarrhoea in primarily piglets during the first three weeks after birth. There is no cure.

Coccidiosis, caused by intestinal parasites, mostly affect piglets during their first three weeks of life. The disease results in white to yellow frothy diarrhoea and may be treated by antimicrobials.

Clostiridium is a bacterial disease that affects piglets during their first three weeks of life. Affected piglets have bloody diarrhoea and sometimes die with no apparent cause. There is no cure.

Swine dysentery is a bacterial disease that primarily affects growers. The disease may be carried by rats, so farmers should keep rodents out of their production areas. Affected pigs will lose weight and their dung will usually be soft with a darkish grey colour. The disease may be treated with antibiotics.

Illeitis, caused by Lawsonia bacteria, usually affects growers. Affected pigs have bloody diarrhoea and sometimes die for no apparent reason. This disease may be treated with antibiotics. All these diseases can be prevented through good hygiene and sound biosecurity measures. One of the first steps during any of these outbreaks would be to remove sick pigs from the healthy ones to prevent the spreading of these diseases.

Worms may cause diarrhoea if they are present in large numbers. To prevent worms, pigs should be dewormed regularly and premises should be kept clean and dr