UNESCO and the Mapungubwe Cultural Landscape

Mapungubwe is the site of an ancient African civilisation that flourished on the banks of the Limpopo River from 900 AD to 1300 AD. It is the earliest known kingdom in sub-Saharan Africa and its influence spread over a considerable area, covering parts of what is now South Africa, Botswana and Zimbabwe.

Furthermore, in its later stages, Mapungubwe was a powerful kingdom that had connections with early Chinese, Arabic and Indian merchants, who had been trading along the East Coast of Africa from as long as 4000 years ago. When the Mapungubwe state collapsed rather suddenly in 1290 AD, the inhabitants moved off to greener pastures, such as the legendary stone city of Great Zimbabwe.

It is now generally accepted that the former Mapungubwians are among the precursors of the modern day Shona and Venda people (and perhaps contributed to the Sotho-Tswana nation as well). As such, Mapungubwe plays a central part in an important and largely forgotten episode of our early history. 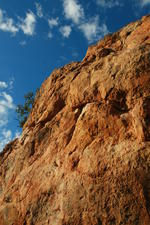 Despite its historical pedigree, however, Mapungubwe and its people seemed to slip out of the common consciousness, both among the local tribes who lived in the area and the more recent European arrivals.

Even after it was ‘re-discovered’ in the early 1930s, the story of Mapungubwe was usually downplayed as an anecdotal or mysterious chapter in Africa’s past, and was relegated to the backwaters of history.

Luckily, that changed in 1994 as there was a renewed interest in the once-neglected realm of African prehistory.

There was also a desire to find and reclaim symbols of a proud African past that could act as a beacon for the ‘African Renaissance’. Mapungubwe was just the ticket.

As ICOMOS (the International Council on Monuments and Sites) stated in their report to UNESCO (The United Nations Educational, Scientific and Cultural Organization), "Mapungubwe is of universal value for the way it demonstrates the rise and fall of the first indigenous kingdom in southern Africa. Within the site are the remains of three capitals, their satellite settlements, and the lands around the confluence of the Limpopo and Shashe rivers, whose fertility supported the large population within the kingdom."

Mapungubwe’s position at the crossing of the north/south and east/west routes in southern Africa enabled it to control trade through the East African ports to India and China and within southern Africa.

From its hinterland it harvested gold and ivory – commodities in scarce supply elsewhere – which brought it great wealth displayed in such imports as Chinese porcelain and Persian glass beads. Mapungubwe’s comparatively sudden demise, brought about by deteriorating climatic conditions, and the abandonment of the capital, means that the remains of the kingdom have been preserved. Mapungubwe’s position as the power base in southern Africa shifted north to Great Zimbabwe and Khami. Mapungubwe must be seen as the forerunner of these two later kingdoms."

Mapungubwe is a worthy recipient of National Heritage and World Heritage status. But where does the term ‘cultural landscape’ fit in? Well, since 1992, significant interactions between people and the natural environment have been recognized as cultural landscapes, and Mapungubwe certainly fits this description.

As Jane Curruthers, a well-respected environmental historian, puts it: “Mapungubwe is not natural, but an environment constructed to reflect the society that utilised it. The driver of the original society was the use, exploitation and maximisation of natural resources to reinforce social, political and economic values.”

Carruthers continues by quoting another commentator, P. Fowler, who states: “much of the world’s terrestrial surface is, to a greater or lesser extent, ‘cultural landscapes’ [and] one of the most important long term benefits of the inclusion of cultural landscapes under the World Heritage Convention is that it should help to promote everywhere greater awareness of landscape issues generally”.