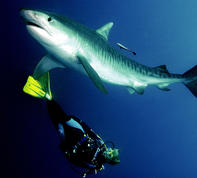 Requiem sharks belong to the Carcharhinidae family which comprises of 12 genera and 50 species. They have five-gill slits and their teeth are blade-like with a cusp. A third eyelid, named a nictitating eyelid, protects their eyes. These requiem sharks are known for attacking humans. They weigh about 900kg. These sharks are viviparous, and the young are fully developed when born in litters ranging from 10 to 100. Females mate every three years.

They can be found in tropical oceans across the world.