Nyala [Nyala angasii of Tragelaphus angasii]
Order - Artiodactyla
Family - Bovidae
The common name of this antelope is derived from the traditional Zulu word for the animal, inxala.

Nyala bulls measure about 1.05 m at the shoulder with a weight of 92 to 126 kg. Cows are much smaller in size, measuring 900 mm at the shoulder with a mass of 55 to 68 kg. Bulls have a striking, charcoal-grey to brownish, shaggy coat, marked with white stripes vertically running down their bodies, are spotted on their flanks, and have white chevron-shaped faces. Only the bulls have horns, which measure about 650 mm in length and curving inward.
Along their underparts, from behind the chin to between the hind legs, runs a ridge of long hairs. From their heads, along the spine to the rump, they have dense, black manes. Cows are chestnut-brown in colour and have stripes on their flanks even more prominent to those of the bulls.

This species is both a grazer and a browser. It will readily eat flowers, fruits and leaves – a variety that plays a role in securing its survival.

Interestingly, juvenile bulls have the appearance of cows. It is suggested that this disguise protects young bulls from jealous dominant bulls, allowing young bulls to grow up safely under the protection of the herd.

After a gestation period of 220 days, a single calf with a weight of 5 kg is born. Twins, although, are not uncommon. They have no specific breeding period, but peaks occur in the months of autumn and spring. The average interim between births is about 297 days. Cows are sexually mature between 14 and 18 months. Bulls navigate their mating opportunities through dominant behaviour.

This is a non-territorial species. The home ranges of both sexes overlap, the ranges of cows being double the size of bulls’. They prefer dense woodlands and thickets close to permanent water sources as their habitat. Nyalas are very elusive animals and are more likely to be spotted at night.

Nyalas are found in many game reserves and private farms throughout South Africa as a result of translocation, many living in the Kruger National Park.

Male spoors can be distinguished from females’ as their forefeet are slightly wider. 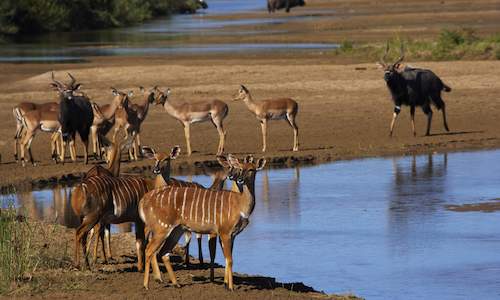 The common name of this antelope is derived from the traditional Zulu word for the animal, inxala....more 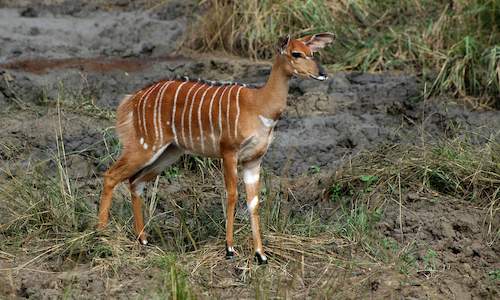 Nyala are the most striking of antelopes and also exhibit the greatest sexual dimorphism (difference between the genders)....more

What Defence Mechanisms do Nyala Use? 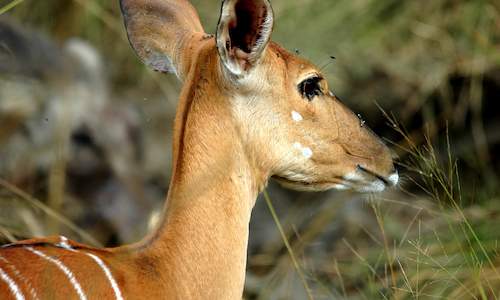 The bases of the back of a nyala’s ears are white as is the underside of the fluffy tail which is raised when the animal takes fright....more

What Sounds Do Nyala Make? 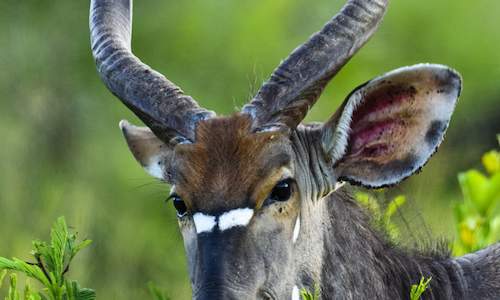