Geologically speaking, Mapungubwe lies in a basin between two granite cratons (a large section of stable crust). This depression is called the Limpopo Mobile Belt. Around 250 million years ago, the earth’s crust began to shift along the belt and molten rock from the mantle was pushed up through narrow cracks in the sandstone.

This formed dolerite dykes and, when the sandstone eroded away, the harder dolerite was left behind in regular-shaped ridges. From the top of Mapungubwe hill you can clearly see a very well preserved example of this, cutting across the landscape in a straight, black line. Many people think that this natural dyke is actually a large wall made by the citizens of Mapungubwe. 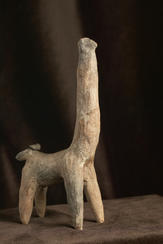 There was life in the Limpopo Basin for millions of years before the coming of humans. Dinosaur fossils dating back 200 million years have been found. Other objects of palaeontological interest include fossils of flowering plants, whole-bodied insects and termite mounds.

Some dinosaur footprints have also been identified, imprinted in the fine-grained mudstone. Although no hominid fossils have been found, the tools of early stone age communities are evident throughout Mapungubwe National Park. More recently, late stone age artists, such as the San, painted enduring rock paintings onto the walls of caves around Leokwe hill.