The base of the Limpopo Coat of Arms is black and green with the motto - PEACE UNITY AND PROSPERITY, written on a white scroll. The shield is mainly coloured yellow with rounded crenelations at the top and a green baobab tree inside. 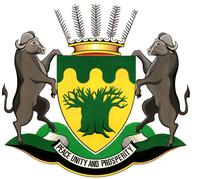 The top edge of the shield is green. The shield symbolises the government's commitment to protect human rights. The baobab represents strength and steadfastness of the people. The rounded crenelations represent mountain ranges and the rich agricultural lands of Limpopo Province. The cornet on the top of the shield is depicted in red and gold with five cycad leaves.

The cornet symbolises royalty. The cycad is an endangered plant, symbolising preservation and the continuation of traditional leadership. The supports to the Coat of Arms are two buffalo, which represent unity, strength and political stability.

The African buffalo is a large and powerful bovine that predominantly lives in a herd. Both male and female buffalos have horns, though males have a heavier boss and more upcurved horns than females. They are bulk grazers and have a positive impact on their environment, in that they can convert long grass into short grass, which other grazers prefer.

As a large herd, they trample and churn up the ground and mix in their dung enriching the soil as they move. The male buffalo are ranked according to their size, strength and fighting ability. The more dominant males feed ahead of the herd and in the centre so that they have the best-untrampled grass to eat. They are also afforded the best protection from predators.

The high ranking bulls also have better access to any cow in oestrus. If under attack from a predator they let out a distress bellow which activates the whole herd to respond as one. The calves and younger animals become sheltered with the cows in the centre whilst the adult males ward off the threat.

Baobab trees are found in the northern parts of Limpopo Province, they are also found in other parts of Africa and Australia. They can grow to an enormous size and can live to a ripe old age, carbon dating shows that some baobabs are around 3000 years old. It is a strange looking tree, with spreading branches which can look like roots, rather like it has been planted upside down.

The Baobab has white flowers that only open at night and have an unpleasant aroma, to humans anyway, similar to rotting flesh to attract the nocturnal insects and bats for pollination. The fruit, which can grow up to a foot long, contains seeds covered in a white powder, which is rich in vitamin C and tartaric acid.

The original cream of tartar was made from the baobab seeds. The baobab over the centuries has provided shelter, nourishment and medicine to people and animals alike.