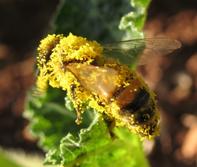 Pollen is a substance produced by the anthers of seed-bearing plants. It consists of fine pollen grains containing male gametes (a plant’s sperm cells). These male gametes in the pollen merge with other cells in a process called fertilisation.
Broadly speaking, there are two types of pollen:
Entomophilous pollen - collected by insects during insect pollination.
Anemophilous pollen - carried by wind rather than by insects and associated with allergies.
Pollen is an important food source for bees, providing protein in the diet of adult bees, and is essential for weight gain in the newly-hatched bee larvae.

Pollen is collected by the worker bees and carried to the hive in pollen baskets (corbicula) on their hind legs. Pollen is collected on the furry body of the bee. As they fly, the motion of the wings creates static electricity and a negative charge. When the bee lands on a flower, the pollen is shaken from the anthers and sticks to the static hair that covers the honeybee’s body.
The bee’s tongue and mandibles are also used to lick and collect pollen grains moistening the pollen granules which causes it to stick together. The pollen is then scraped together by the back legs, compacted into balls and pressed into the corbicula.
Back at the hive, the pollen is deposited into a cell, together with other ingredients.

When pollen is taken into the beehive and packed into empty cells, it is mixed with mixed with nectar and digestive fluids before being sealed in a cell with a drop of honey. The digestive fluids contain lactic acid bacteria which partially digest the sugars, break the proteins into easily digestible amino acids and prevent mould growth.
This mixture, called ‘bee bread’ is fed to the honey bee larvae and newly hatched worker bees. The young workerbees need this protein-rich bee bread to develop the glands they need as adult bees to feed the larvae and the honey bee queen (Adult bees eat honey).
Bee pollen is commercially available for human consumption and is collected by beekeepers from worker honey bees, using a pollen trap. The use of pollen is controversial and indeed, the United State’s Food and Drug Administration (FDA) all but contest claims of ‘nature’s greatest source of protein’, ‘germ killer’ and ‘allergy-reliever’. Arguments against the use of bee pollen for human use include that this will reduce protein availability for bees, in addition, there are cheaper sources of supplementing a human diet.