The Collapse of Mapungubwe

©Roger de la Harpe
For 75 years, the people of Mapungubwe lived life on a comparatively grand scale. They ruled over a state that covered 30 000 square kilometers and traded extensively throughout the region, with local tribes and with the merchants at Sofala and Chinuebe. Then, suddenly, it all went wrong. In 1290 AD, the grand capital was abruptly abandoned and the people of Mapungubwe scattered to the winds.
It is hard to be conclusive when looking back through the undocumented centuries. Perhaps the old king died without leaving a successor; perhaps the successor was weak and could not hold the state together; perhaps there was a quarrel among the royal family; perhaps they were invaded by another tribe (although this is unlikely); perhaps another town took control over the trade routes into the interior; or perhaps it was the fickle climate that brought about the end of Mapungubwe. The latter possibility is considered the likeliest.

©David Fleminger
Environmental records show that, about 1300 AD, there was the onset of a ‘Little Ice Age’, just a small one. It was enough, however, to drastically change the life of a prehistoric agricultural community. The good rainfalls that had prevailed since the start of the K2 village era dried up, sparking the worst drought in thousands of years, and the Limpopo River became erratic, flooding at the wrong time and destroying crops. This food crisis may have been exacerbated by an outbreak of plague carried by domestic rats (rattus-rattus).
With the collapse of the food supply, the centre could no longer hold and the capital crumbled. The ability of Mapungubwe to continue trading was irrevocably compromised, and a top-heavy system of government was totally unprepared to handle the ensuing crisis. It was the end of the Mapungubwe state. After all, a king is nothing without his people. 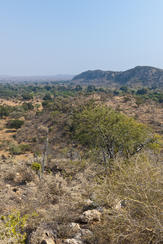 ©Roger de la Harpe
Thus, the people of Mapungubwe abandoned their golden graves, and drifted off to settle in new territories to the south and northeast. As is the case with many other ancient civilisations, their departure was abrupt and there was no continuity with subsequent communities. Their culture did not endure, and the Mapungubwe-branded pottery does not appear at any subsequent sites.
For the next 700 years, the sacred hill kept its secrets. It was never resettled by the subsequent tribes who moved into the area, and the identity of the Mapungubwe people dissipated into the void of history. In fact, we still know very little about them. Cultural traits such as language, music and religious beliefs do not leave behind any physical traces.
So we can only guess at the meaning of the various grave goods, and hypothesise about the specifics of their social organisation. In fact, we don’t even know what they called themselves, since ‘Mapungubwe’ is a modern term.

In any case, it is thought that as the capital dissolved, part of the population moved to the up-and-coming city of Great Zimbabwe. This was an existing settlement, about 150 kms away to the north east, that had its own pottery tradition and culture. With the fall of Mapungubwe, Great Zimbabwe slowly took over as the primary centre of trade with the east coast.
As it grew, Great Zimbabwe also assumed many of the cultural traditions and spatial distinctions of Mapungubwe, and enlarged on them to create a marvellous city of stone, with lofty walls and enormous enclosures. This wonder of the ancient world is also a World Heritage Site, and has its own turbulent history.By David Fleminger
©2022 South Africa Online (Pty) Ltd. SouthAfrica.co.za. All Rights Reserved.