Marking Transitions Through Rites of Passage

Across the world, communities mark major transitions in life through celebrations and ceremonies. From birth to death, these rites of passage regulate and give expression to meaningful changes in people's lives. 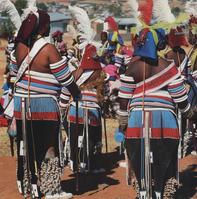 They also play a role in drawing attention both to the individual's emergence from childhood and the assumption of responsibilities associated with adult life. In South Africa, many ceremonies and celebrations are also aimed, more specifically, at securing the spiritual well-being, not only of the individual, but also of the community as a whole.

Throughout the region, this aim is achieved above all by appeasing and paying homage to the ancestors. Although most ceremonies of this kind are generally conducted by the male heads of households, the family’s ancestors usually communicate their desires and concerns to their descendants through the mediation of ritual specialists commonly known as izangoma among Zulu-speaking communities and amgqirha among their Xhosa-speaking neighbours.

Until the late 18th century all chiefdoms in southern Africa observed initiation practices to prepare young people for their roles in adult society. In present-day KwaZulu-Natal, these rites were abandoned in favour of age-grade regiments in the lead up to the rise to power, in the early 19th century, of the first Zulu king, Shaka.

This explains why Zulu-speaking men never participate in the circumcision rites that are still commonly practiced among other South African communities.

A number of celebrations associated with the coming of age of young women nevertheless survive to this day, while the Reed Ceremony, associated with puberty rites among the Swazi, was adopted by their Zulu-speaking neighbours as late as the mid-1980s.

Revival of Interest in Circumcision Rites

Among other southern African groups, there was a revival of interest in initiation rites in the course of the 1990s. In keeping with this trend, young people from urban areas often participate in ceremonies organized by rural chiefs and ritual specialists.

Partly for this reason, it has become increasingly common for these ceremonies to include participants from diverse ethnic backgrounds. From time to time, initiation schools also attract the offspring of families who now live abroad.

Since male circumcision practices are delayed until men are in their late teens or early twenties among groups like the Tswana, Sotho, Xhosa and Ndebele, it is especially these ceremonies that are attracting increasing numbers of outsiders. In contrast to this, initiation tends to coincide with the transition to puberty among groups like the Pedi and Bantwane.

Like people from other communities, those living in the Free State often combine Christian religious services with rituals aimed at appeasing their ancestors....more

In most South African communities dancing is a form of celebration and worship, and garments are designed to accentuate the movement of the dancers....more

Although initiation ceremonies associated with girls among the Bantwane from Mpumalanga province include mock circumcision practices, these rites of passage are aimed primarily at preparing women for their future roles as wives and mothers....more

Initiation of Healers and Ritual Specialists

While many rural traditionalists practice Christianity, they still rely on healers and ritual specialists to mediate between them and the ancestors....more

While returning Batlhping initiates also bow their heads in respect, for some the temptation to take sneak views at their elders - and in this case, also the photographer, Peter Magubane - is too great to avoid....more

Throughout rural South Africa, important ceremonies like weddings and various kinds of initiation almost invariably culminate in celebrations aimed at praising and thanking the ancestors....more

In the mid-1980s Zulu King Goodwill Zwelithini introduced a Reed Ceremony similar to that held annually in Swaziland, the previous home of his first wife....more

The cost of buying these wedding gifts is set off against the ‘lobola’ grooms are required to pay to their future fathers-in-law....more
©2022 South Africa Online (Pty) Ltd. SouthAfrica.co.za. All Rights Reserved.