Future Roles as Wives and Mothers

Although initiation ceremonies associated with girls among the Bantwane from Mpumalanga province include mock circumcision practices, these rites of passage are aimed primarily at preparing women for their future roles as wives and mothers.

As such, initiation practices generally stress the importance of appropriate social and sexual behaviour in adult life. 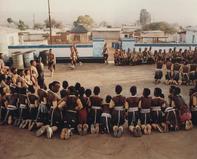 ©Dr Peter Magubane
Among communities like the Bantwane, initiates often vary considerably in age. Both pre- and post-pubescent girls participate in ceremonies of this kind, with girls as young as seven embarking on the six-week rite of passage aimed at preparing them for their future roles as wives and mothers.

©Dr Peter Magubane
All male and female initiation rites involve the adoption of hairstyles and clothing that underline the transitional status of the initiates. In anticipation of their adult status as wives and mothers, Bantwane female initiates shave their heads in emulation of the ‘bicycle seat' hairstyles associated with mature women.

©Dr Peter Magubane
Female Pedi initiates wear both a short, stringed front apron and leather back apron but their torsos remain uncovered throughout the initiation process. It is only once women have children that they are required to cover their breasts to signify their status as mature, married women.By Professor Sandra Klopper
Next - Initiation Rites
©2022 South Africa Online (Pty) Ltd. SouthAfrica.co.za. All Rights Reserved.