Like other communities in South Africa, Sotho speakers in the Free State are staunch Christians.

Many still have links to centres founded by European missionaries in the course of the 19th century. To this day, their clothing styles attest to the influence of the European fashions they first encountered through these missionaries. 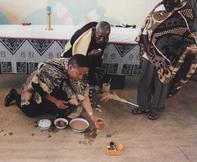