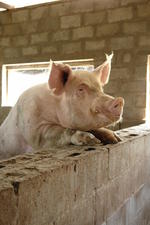 ©Glenneis Kriel
Keeping a Boar for breeding can be expensive and increase the risk of diseases.
Unlike natural mating where a boar is physically placed with sows to breed, artificial insemination entails the insemination of sows with semen of a boar that may not necessarily be on the farm.

The procedure allows a producer to access more superior boars than would otherwise be possible, while significantly reducing risks associated with natural mating, such as injuries, diseases spreading from boars to sows and the other way around and the overuse of boars which may lower the viability of semen. As a matter of fact, semen viability can actually be tested before use with artificial insemination.

Besides this, artificial insemination is relatively cheaper than the cost of keeping and feeding a “top of the range” high performing boar on the farm and significantly reduces the risk of inbreeding, since farms have a bigger pool of genetics to choose from. It also allows large numbers of sows to be bred in a short time, giving a producer better control of breeding dates and subsequent pig flow.

©Glenneis Kriel
Farmers may buy semen in or collect it from boars on the farm. The semen is alive so should be handled with care. It should be kept at 16 to 18 degrees Celsius from collection to insemination, as viability will be reduced outside this range.
For the best results and to reduce handling stress, artificial insemination should be performed by trained staff. The first step would be to identify whether the sow is ready to be inseminated. After weaning, sows may be placed with a boar for about a half an hour each day and when she stands for the boar, she will be in what is called, standing heat.
Most farmers use a teaser boar or pheromones to help detect heat. Signs that a sow is in heat, according to Danie Visser’s book, Modern Pig Production, include erect ears, the vulva may be red and swollen, a water stringy discharge from the vulva and when back-pressure is applied, she stands rock solid whereas she would have run away otherwise. She will be increasingly interested in the boar and start to mount other females. Heat usually lasts for 36 to 72 hours.

©Glenneis Kriel
The catheter should be left in the sow for another five minutes after insemination.
It helps to keep a boar near a sow during the insemination process. According to the Iowa Pork Industry Centre, this will encourage a strong oestrus response and help with the insemination process by causing the sow to draw the semen into the reproductive tract and minimise flow back.

Modern Pig Production advises farmers to wipe away all dirt and clean the vulva with a dry paper towel. Open the vulva lips with the left hand and gently insert the catheter with the right hand, so it points upwards at an angle of 45 degrees to avoid the bladder. Thereafter, the catheter should gently be moved further up the reproductive tract until a firm resistance is felt. Some catheters need to be turned clockwise to ensure it locks into the cervix.

Once the semen is attached to the catheter, the semen should easily flow into the cervix unless the catheter requires the semen bottle to be pressed before it starts to flow. Resistance may be due to a peristaltic wave in the uterus, in which case it should be waited out.
The process usually takes two to three minutes, but might take a little longer.
The catheter should be left in the sow for another five minutes after insemination, to continue cervical stimulation, maintain uterine contractions and maximise semen uptake. At the end of insemination, the catheter should be doubled over and bound, by threading the bend through the hole at the end of the flat pack, to prevent the backflow of semen.
The time, inseminator and the quality of the insemination should all be recorded to later analyse the effectiveness of the service. Any abnormalities, such as vaginal bleeding, should also be recorded at this point.
A sow should only be inseminated a second time if she is still in standing heat.