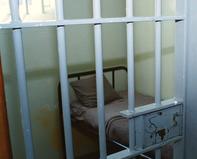 ©Eric Miller
The African National Congress (ANC) leaders and representatives were the first to be imprisoned. They were soon joined by representatives of the other opposition groups, who were systematically rounded up and packed off to the island where they couldn’t cause trouble.
Over the years, members of the ANC, Pan African Congress (PAC), the South West African People’s Organisation (SWAPO), the National Liberation Front, the African People’s Democratic Union of South Africa, the non-European Unity Movement, the Liberal Party, the United Democratic Front, the Indian Congress, the Azanian People’s Organisation (AZAPO), Black Consciousness leaders and many others would be incarcerated on Robben Island.
The prison population was therefore far from homogenous and conflicts between the various factions did flare up from time to time, no doubt encouraged by the prison authorities.

The Case of Robert Sobukwe

©Roger de la Harpe
An important struggle hero imprisoned on Robben Island was Robert Sobukwe, the founder of the Pan African Congress. Charismatic and defiant, Sobukwe was among the first political prisoners arrested in the chaotic days after Sharpeville protests. He was quickly convicted and spent three years in Pretoria Central.
When his sentence was up, however, the government didn’t want to release him as he was considered too dangerous. So, a new law was passed which stated that Sobukwe could be kept in custody indefinitely, without any further charges being levelled against him, until he could convince the authorities that would no longer act against the apartheid regime. It was called the Robert Sobukwe clause.
Sobukwe defied the government’s blackmail and was sent to Robben Island. But even here he was considered such a threat that he was not allowed to reside in the main prison. Instead, he was put in a house on the outskirts of the village and kept apart from all the other prisoners. For nine years he lived in the tiny, two-roomed house, under constant guard.
He was allowed no visitors and was forbidden to speak to anyone. His isolation was so complete, it is said that he partially lost the ability to speak. Periodically, a government stooge would arrive at the house and offer Sobukwe his freedom on condition he gave up the struggle. Sobukwe refused every time.
Even though Sobukwe’s case was exceptional, treatment of all political prisoners on Robben Island was brutal, especially in the early years before 1965. Many of the warders were poorly educated and resented the enlightenment of some of their wards. The island was also far away from the eyes of the world, and prison staff could get away with just about anything. It was exactly what 'terrorists, communists and enemies-of-the-state' deserved. To be fair, however, it should be mentioned that the life of a prison guard on Robben Island was tough. They had long shifts, thin uniforms and bullying superiors who spread hate and fear throughout the community.

©Eric Miller
In 1962, the apartheid authorities caught a senior African National Congress (ANC) official named Nelson Rolihlahla Mandela. He was captured while driving to Howick in Natal to meet with the ANC president, Albert Luthuli (South Africa’s first Nobel-Peace Prize winner). A wanted man, Mandela was disguised as a chauffeur, but the police had been tipped off and he was arrested in the Natal Midlands.
Shortly afterwards, the police stumbled on a group of ANC bigwigs who were meeting at a farm called Liliesleaf, in Rivonia, Johannesburg. They were all arrested and, along with Mandela, charged with treason, sabotage, communism and plotting to overthrow the government.
The prosecution asked for the death penalty but, fearful of an international outcry, the ‘Rivonia Eight’ were sentenced to life imprisonment. Nelson Mandela, Walter Sisulu, Achmed Kathrada, Andrew Mlangeni, Elias Motsoaledi, Govan Mbeki and Raymond Mhlaba were shipped off to Robben Island. Denis Goldberg was sent to Pretoria Central. With Luthuli under house arrest and Oliver Tambo in exile, the government had effectively silenced the opposition within a few short years. Nevertheless, the struggle would live on, underground.By David Fleminger
©2020 South Africa Online (Pty) Ltd. SouthAfrica.co.za. All Rights Reserved.