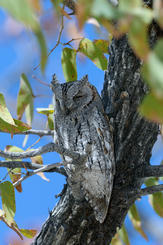 The name scops comes from the Latin scopae, which roughly means broom and refers to the brush of feathers the owl has around its beak, while at rest. Two species of scops owls, from the family Strigidae, can be found in Southern Africa, being the African scop’s owl (Otus senegalensis) and the southern white-faced scop’s owl (Ptilopsis granti).

Both species of scops owls have cryptic plumage and are very well camouflaged when roosting against the bark of trees.
These owls vary greatly in size, with the southern being almost twice the size of the African. Another easy way to tell them apart is by the colour of the eyes, with the African scop’s having yellow eyes and the white-faced having orange eyes.
The African scop’s owl is the smallest owl found in Southern Africa at around 16 cm. As with all owls, the female is larger than the male.

Scops owls are mostly ambush predators, with them normally hunting from a perch in semi-open landscapes. Their diet is varied and ranges from small mammals to insects and reptiles.

Scops owls are almost exclusively nocturnal. Scops owls are not particularly territorial and can be found roosting close to one another. When roosting during the day, these owls keep completely still, normally up against a tree trunk or branch, making them difficult to spot. During the night, these owls will call one another every few minutes. The African scops owl makes a single “kruup” note call and the Southern white-faced owl makes a bubbling “popopopopopopeeee” note call.

To avoid detection by potential predators, scop’s owl chicks will slit their eyes and raise their eye tufts, to try and look inconspicuous. If approached, they will erect their feathers and hiss and growl, while opening the wings slightly, to increase their size and try and deter predators. The same practice is followed by the adults in the face of predators.