©Glenneis Kriel
Feeding of acorns on its own will not be enough to raise healthy pigs.

What exactly qualifies as swill? Swill is the traditional name for food scraps or food waste that contains or has come into contact with meat or meat products.

According to the Animal Disease Act (Act 35 of 1984), it is against the law for farmers to feed such waste, whether from their own kitchen, boats, restaurants, hospitals or hotels to pigs, unless the scraps have been boiled for at least an hour to destroy the pathogens. This also means that pigs should be kept away from garbage and dead animals.

Other By-products to Feed Pigs 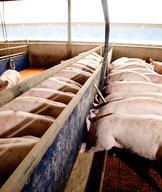 ©Glenneis Kriel
If cheese is produced on a farm, whey can help to reduce pig feeding costs.

Other waste and by-products, such as surplus fruit and vegetables, crop residues, such as maize stalks, leaves and cobs, and factory waste, such as stale bread, dated dog cubes, spoilt milk, whey from cheese-making and brewery grain is allowed. When using these by-products, farmers should nevertheless be extra cautious to ensure the by-products have not been contaminated with dead animals and does not contain any harmful chemicals or toxins.

Feeding by-products alone will have a negative impact on an animal’s health and growth. According to the South African Pig Producers Organisation’s production manual, Pigs for Profit, pigs who only receive stale bread, will put on fat rather than meat and may suffer other health problems. The same applies to green feed, which should rather be seen as a vitamin mix than food.

©Glenneis Kriel
Make sure that by-products from mills do not contain any contaminents or harmful products.

The best thing to do when deciding on what to feed your pigs, would be to speak to an animal nutritionist. The nutritionist will identify the nutritional value of the by-products you want to use and develop a balanced ration that will help to prevent nutritional shortages.

Pigs that do not receive a balanced ration tailored to their specific requirements, will become stressed, more vulnerable to diseases and grow slower.