Despite the growing influence of Western culture, many Xhosa people still practice their traditions and cultural customs. The Xhosa were originally cattle herders who are traditionally very hard-working and resilient people.

Many families have ancestral homesteads in areas like the Eastern Cape of South Africa, but work in more developed towns and cities like Cape Town and Johannesburg. The Xhosa people have a range of cultural customs that they adhere by; some traditional practices include the initiation of males when they are of age, which involves them going to initiation school (‘the mountain’), receiving sacred teachings from their elders and emerging as men.

Another practice is lobola, which is the payment made by a man who seeks to marry a woman. He must offer the woman’s father and family payment in the form of livestock or other items for her hand in marriage. The marriage itself also involves rituals and ceremonies that many Xhosa people still adhere to.

Deaths and funeral proceedings are also done in a very traditional manner. More modernised Xhosa people tend to be less strict on certain customs, while the elders are usually adamant on keeping traditions and customs ongoing in the family. 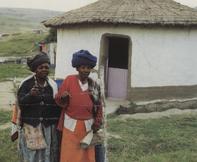 Historically, homesteads 'imizi' of the Xhosa Culture tended to be scattered over the rural landscape and were situated on ridges to facilitate drainage and military defence. Dwellings consisted of a circular frame of poles and saplings, which were bent and bound in the shape of a beehive and thatched from top to bottom with grass.

This type of dwelling 'ungquphantsi' had a low doorway and a person had to stoop to enter it. During the early 1820s, this structure was superseded by a more durable and permanent style, which consisted of a circular wattle and daub wall - incorporating methods of construction that had been introduced by missionaries such as Dr J. T. van der Kemp, supporting a thatched conical roof.

The dwellings comprising the homestead were usually grouped in a semi-circle facing onto a large circular brushwood cattle byre, which would have one or smaller byres situated on its sides for keeping goats. One or more bottle-shaped pits for storing maize were normally located under the floor of the cattle byre. These grain pits were well plastered and sealed with large stones, in order to prevent water seepage and the consequent spoilage of maize through fermentation and rotting.

At the best of times, the maize that was stored in these pits had a musty odour and a sour taste, but it was tolerated, and even enjoyed, particularly during the seasons when maize was in short supply. Also situated outside, behind or adjacent to the houses, were screened-off cooking areas, an earthen oven for baking maize bread 'isonka' as well as one or more wickerwork bins made of saplings for storing maize on the cob. The swept area between the doorway of the main house and the gateway of the cattle byre was known as the courtyard 'inkunda'.

This was where court cases were heard at the Great Place of a chief or paramount chief. Homesteads were economically self-sufficient entities, withholdings of livestock and lands for cultivation and hunting. A homestead had a number of houses in which a man, his married sons, their wives and their offspring resided.

A wealthy man or chief with large cattle herds might have unrelated clients and their families residing at his homestead as well. Such clients provided personal services 'ukubusa' to the chief or household head, herding his livestock in return for the usufruct in milk and progeny, the latter forming the basis of their own herds.

©Dr Peter Magubane
As is Xhosa custom, all the first-born sons of a man's wives stand to inherit a share of his livestock when he dies.

Rules of inheritance operated only within the immediate family: the first-born son of the Great Wife, highest ranked wife, inherited his father's livestock. Where polygyny was practised, all the first-born sons of a man's wives stood to inherit a share of his livestock, from which they would build their own herds.

Historically land was allocated through the political authorities — i.e. the chief-in-council — and not on the basis of descent groups. Even in cases of wider cooperation between homesteads, for example, the ad hoc work parties which are organized to assist in planting, weeding and harvesting, the descent is less important than geographical proximity.

The agnatic group - i.e. related through the male line - consists of a cluster of agnatically related household heads and their offspring living in a particular area. Since these men are the descendants of a common great-grandfather, they are very conscious of the group to which they belong.

This cluster can vary from 2 or 3 to about 20 household heads. Land and stock is not owned communally by members of the cluster but is rather held by the individual Xhosa homesteads within the cluster. These groups have two important, but limited, functions: firstly, to settle disputes between members of the group, and, secondly, to constitute the congregation of the ancestor cult.