What is Climate?
Climate and Farming in South Africa 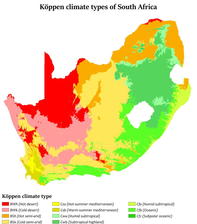 ©Adam Peterson
The climate of a farming area determines the suitability of a crop as each crop has specific climatic requirements. Some of the most important factors determining climate include temperature, heat units, positive chill units, day length, relative humidity, frost, hail and wind.

Climate and Rainfall in South Africa

South Africa is a hot, dry country, with the average annual precipitation over 65% of its surface area being less than 500 mm. This rainfall is considered as the bottom limit for successful rainfed crop production. Several crops have much higher rainfall requirements, such as tea plantations needing over 1 000 mm per year.

Because South Africa is such a hot, dry country the average annual water loss through evaporation is high and increases the need for irrigation water.

Macro-climate refers to climate on a national or country scale. Large areas with similar types of climates are grouped together and outlined on a map. These can be classifications based on combinations of several climatic parameters such as the Köppen climate zones.

The Köppen climate classification divides climates into five major types, represented by the capital letters A, B, C, D and E. For example A is tropical and E is polar.

Meso-climate refers to localised climate. Several types of meso-climates can be found within a specific macro-climate zone. The climatic characteristics of meso-climates and their geographic distribution are usually mainly determined by topography. Topography includes features such as valleys, mountains and rivers. Meso-climates around the Magaliesberg, running east-west from Pretoria past Rustenburg provide an excellent example.

The northern slopes of the Magaliesberg are frost-free and have year-round high temperatures suitable for citrus and subtropical crops under irrigation. The lower-lying foot slopes, however, have a completely different climate from the middle slopes. Here, winters are cold and frost makes this area unsuitable for subtropical crops.

Micro-climate differences are often natural features associated with small areas. Irrigation is often used to modify a micro-climate: an irrigated field in a semi-arid or arid area differs much from the climate of the surrounding non-irrigated area, especially in desert areas.Source Water Research Commission
©2022 South Africa Online (Pty) Ltd. SouthAfrica.co.za. All Rights Reserved.