Symbols on the South Africa Coat of Arms 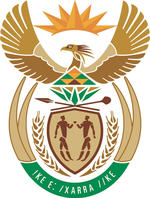 The Oval Shape of Foundation

The Motto - Written in the Khoisan language of the /Xam people, !ke e: /xarra //ke, means ‘Diverse People Unite’. On an individual scale, it indicates a unity between one's thoughts and actions. On a collective scale, it indicates that as a nation we should be united together with a sense of belonging and national pride.

©Jacques Marais
Elephant tusks
Elephant Tusks - Elephants are known for having wisdom and strength. In the coat of arms, they also represent moderation and eternity.

©Tracey Derrick
The Ears of Wheat - The wheat represents fertility. Germination and growth of the wheat symbolise the growth and development of our nation to achieve an unlimited potential. It also relates to the nourishment of the people and represents the agricultural bounty from the earth.

©Roger DelaHarpe
Zulu dancers with ceremonial shields
The Shield - Has two functions in the coat of arms, it represents the spiritual defence of our nation and also holds the figures that represent our identity.

©Roger DelaHarpe
Rock art Main Caves, Giants Castle Game Reserve, Ukhlahlamba Drakensberg
The Human Figures - These figures are derived from the world famous South African rock art images found on the Linton stone, which is now housed in the South African Museum in Cape Town. As the oldest known inhabitants of our land, the Khoisan, are a testament to our common humanity and heritage as South Africans. The figures in the image are depicted in an act of greeting one another, this is to symbolise unity. They also represent the individual's journey for transformation into the greater sense of belonging to the nation and by extension, collective humanity.

©Roger DelaHarpe
Sharpening a spear
The Spear and Knobkierie - These represent the symbols of defence and authority, they also represent the powerful legs of the secretary bird. As the spear and knobkierie are lying down, it symbolises peace.

The Oval Shape of Ascendance

©Nigel Dennis
King Protea (Protea cynaroides)
The Protea - Is shown as an emblem representing the beauty of our land, with the flower representing our potential as a nation in the pursuit of an African Renaissance. It also symbolises growth from the earth and nurtures from above, depicting the complete integration of forces. The most popular colours of Africa have been assigned to the protea; green, gold, red and black.

The Secretary Bird - On the Coat of Arms, the secretary bird is shown to be in flight, depicting growth and speed. A powerful bird, whose legs, represented by the knobkierie and spear, assist in its hunt for snakes, which symbolises protection to the nation against all enemies.

The bird is a messenger of the heavens, symbolising here a divine majesty. The uplifted wings are an emblem for the ascendance of our nation, whilst also offering protection. The secretary bird is depicted in gold, symbolising its association with the sun and the highest power.

The Rising Sun - The sun is an emblem of brightness, splendour and energy. It symbolises knowledge, good judgment, willpower, the ability of reflection and the promise of rebirth. It is the source of all life, of light and represents the ultimate wholeness of humanity.

All the elements of the Coat of Arms combine to form the lower and upper oval shapes forming a symbol of infinity. From the tusks to the rising sun the shape formed is that of the cosmic egg from which the secretary bird emerges. Symbolically, it implies the rebirth of the spirit of our great and heroic nation of South Africa.