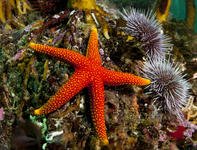 Flattened bodies which merge into arms. Five or more arms are present (up to 24). Ventral mouth. Have tube feet on which they move around. Some have knobs or ‘thorns’ on the body and arms. Colour ranges from brown, black or white to orange, red, yellow and purple.

Asteroidea class falls under the Echinodermata phylum, which includes all the Feather and Brittlestars, Sea cucumbers and Sea urchins. Slow moving, bottom-dwelling animals. Can regenerate arms if lost. Some turn their stomach inside out on prey to digest it – also called evisceration. Reproduction by pelagic spawning.

Occurs in all oceans of the world, including the Arctic.