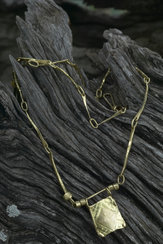 ©Roger de la Harpe
The first modern awareness of Mapungubwe’s trade surfaced in the 1930s, when white people started exploring the hill for the first time. Undeterred by tribal taboos and what they thought of as silly superstitions about the ancestors, these early investigators found a cemetery that contained 23 graves. Most of these burials were unremarkable, but three really caught their attention. One of them, No. 14, was a woman who was buried in a sitting position, rather that on her side.
More impressively, however, was her funerary ornamentation. She wore more than 100 gold bangles around her ankles, and her grave contained 12 000 gold beads (weighing around 2.2 kilograms) and 26 000 glass beads. Her discoverers had to carry the booty away in a bucket. The second important grave was that of a man, also buried in a sitting position, who wore a necklace of gold beads and cowrie shells.
He also had, to keep him company in the afterlife, some objects fashioned out of gold foil – one of which resembled a crocodile.
The most famous find, however, was a person of indeterminate gender who was buried with three breathtaking gold objects: a bowl (probably used as a crown or headdress), a sceptre (or mace) and a little rhino. A couple of additional gold rhino fragments were also found in the cemetery, but the over-eager excavators did not record where they were uncovered.
Since the other graves on the hill did not generally contain any objects of value, it can be assumed that these three people were very important indeed, although their true status cannot be known. The woman, for example, may have been a royal mother, a sister, a wife, a sangoma or even the Queen of Mapungubwe. 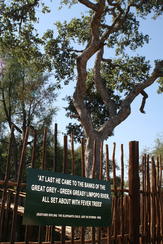 ©David Fleminger
The gold rhino is now an internationally recognised icon. It is a small but intricately crafted object, created by hammering gold foil around a carved wooden sculpture (which has long since rotted away). The thin sheets of gold foil, some only 0.5 mm thick, were then tacked together with dozens of tiny gold nails.
Although the rhino only has one horn (which has suggested to some that it is a one-horned Sumatran rhino, lending credence to their theories of an external hand at work in the glories of Mapungubwe), the representation is entirely accurate. Huffman even specified that it is probably a Black Rhino. Several other rhinos have been found on Mapungubwe Hill, but they are not complete.
Despite the obvious significance of the gold rhino, it should be noted that we do not know if the rhino was a particularly important symbol or totem of the Mapungubwe people. Representations of other animals have been found on the hill, and the rhino may have been only one of a pantheon of spiritual symbols.
It is also unclear whether the gold was melted and worked on the site, or at another industrial area located elsewhere in the state. Nevertheless, the gold rhino is an irreplaceable icon of African prehistory and the star attraction of the Mapungubwe Museum collection.

The Mapungubwians honoured their dead with gold objects and beads showing that the precious metal wasn’t just for trade anymore; it had found a local use, which was spiritual as well as monetary. Nevertheless, there was a lot of trade going on between Mapungubwe and the coast.
As at K2, the people of Mapungubwe traded their gold, ivory, pelts and copper for exotic glass beads, which they used to create decorative objects of social importance. Many thousands of these beads, along with flat discs made from ostrich eggs and fragile beads made from land-snail shells, have been found at the site. In one case, a large ceramic pot filled to the brim with beads was found in a nearby cave.
Cowrie shells, a form of currency that was used widely throughout the ancient world, were also found in one of the royal graves. Several fragments of fragile Chinese Celadon ceramics were uncovered on the hill, which must have been part of a special tea-set for the queen. Clay spindle whorls appear for the first time at Mapungubwe, and this suggests that the people of Mapungubwe were making their own cloth. Cotton was an indigenous crop, but the technology to weave it was probably imported from the coast.By David Fleminger
©2022 South Africa Online (Pty) Ltd. SouthAfrica.co.za. All Rights Reserved.