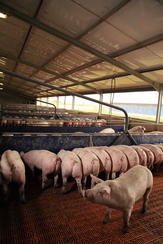 ©Glenneis Kriel
To identify foot and back problems, farmers evaluate pigs while they are walking and moving.
Lameness is a serious problem in pig production.
The pain associated with lameness can make it difficult for pigs to walk to feeding and water troughs, which in turn would have a negative impact on their growth rate, their welfare and cause stress that renders them more susceptible to diseases.
Lameness also has a negative impact on reproduction and has been established as the second biggest reason, after reproduction problems, why sows are culled prematurely.

©Glenneis Kriel
Evaluate pigs that struggle to get up or remain lying down for problems.
The South African Pork Producers’ Organisation (SAPPO) production manual, Pigs for profit, identifies limping, moving difficulties, pigs holding one foot off the ground, pigs refusing or unable to get up from the ground or dragging their hind quarters and joints that are swollen or warm to the touch as the main signs that something is wrong.
To identify foot, leg and back problems, farmers should motivate all the pigs to stand up and then look at the way in which they are walking and moving. Special attention should be given to the ones that lie down first.
The feet of pigs should also be evaluated regularly to identify abnormalities. Pigs have small feet and big bodies, so their feet easily become sore or hurt, especially when they are pregnant and have to carry a heavier than normal load. Research has found that the majority of sows are affected by foot lesions, so early treatment is essential to prevent serious problems.
The Pig Site’s article Lameness in Pigs suggests farmers give sows a locomotion score of zero to three, based on their ease of walking on a clean, dry, level, solid surface. A score of zero would refer to no lameness, while a score of one should be reserved for animals that are mildly lame, in other words, that move freely, but may appear stiff.
A score of two would be used for a sow that is moderately lame. She would use short strides or limp, but still bear weight on the affected limb. Three should be used for a sow that is severely lame, and does not bear weight on affected limbs and needs encouragement to move. 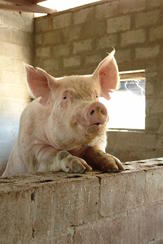 ©Glenneis Kriel
Evaluate the feet of pigs to identify lesions and sores before they cause serious problems.
Although lameness can be caused by congenital or developmental abnormalities, it is primarily caused by pain associated with infections, trauma-related injuries or underlying diseases.
According to The Pig Site, veterinarians suggests farmers place a tray filled with dry lime into electronic sow feeding systems for sows to stand in while eating.
The lime dries out and disinfects the feet every time the sow enters the station, which could help to prevent lameness caused by claw lesions.By Glenneis Kriel
Next - Causes
©2021 South Africa Online (Pty) Ltd. SouthAfrica.co.za. All Rights Reserved.