Writer Jo-Anne Smetherham reflects upon what it means to her to interview six grandmothers from Khayelitsha, Cape Town, all of whom belonged to non-government organisation Grandmothers Against Poverty and Aids (GAPA), for the book ‘The Nevergiveups’. The book documents their life stories from the time they were young girls in villages in the Eastern Cape, until their years as elderly caregivers for their families in Khayelitsha, Cape Town. 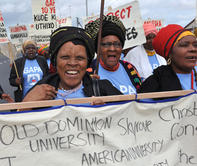 The Power of Companionship

Given the difficulties of the grandmothers’ lives, it is only the companionship and empathy of the other grandmothers at GAPA (Grandmothers Against Poverty and Aids) that keeps them going. And the organisation is doing an extraordinary job. It has been very rewarding to interview the grandmothers.

For all the challenges these women have faced, they have a level of integrity and 'spunk' that is encouraging and deeply inspiring for people such as me, who have far more resources. Their stories are overwhelmingly positive. They are cameos of resilience and strength of character. They have inspired me about what it means to be a human being.

While writing some of these excerpts I felt stunned and had to stop, sitting still and quiet for a few minutes, to take in the huge impact of what the grandmothers were saying. The GAPA grandmothers have shown me that suffering may almost cripple us, but when we manage to crawl, hobble and eventually even run onwards again, how magnificent an achievement every step is.

Alicia Mdaka tells the story of the creation of the GAPA (Grandmothers Against Poverty and Aids) group and how it has impacted her life....more

I had been hired as a cleaner by the people running Blouberg Homes, an agency that offered people houses to rent in Bloubergstrand. For five years I worked there, living in our house in Khayelitsha,...more

Tenjiwe Tutu shares her experiences as a domestic worker in the Apartheid years, avoiding the police and narrowly escaping jail time....more